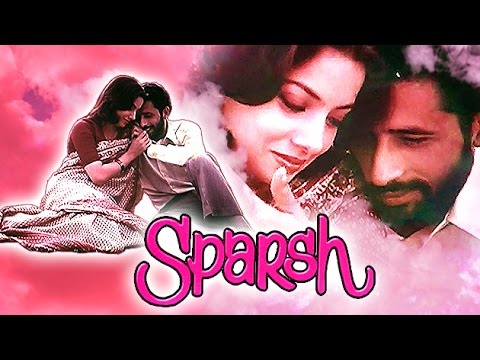 In the dark world of the blind, touch is the only true guide — Sparsh (Hindi for ‘touch’). But whether the blindness shuts the world out and makes the blind incapable of engaging with the world visually, or makes the blind stay in touch with their own alternative world running parallel to the world of the sighted without losing touch with either of the two, or whether they have a combination of the two worlds to savour are certainly not the easiest questions to answer.

Sparsh deals with all the issues that a blind person encounters while interacting with the people in the world of light and sight. But, interestingly and ironically, in addressing a person of sight, it is the blind who shoots the question or the statement in the dark, and not the other way round. If light opens the world of colours for the sighted, what makes us think that darkness does not hold just as rich an alternative world for the blind? However, Sparshbrushes past but does not grapple with the creative side of blindness as much as it does with the finer aspects of the rather delicate bridge between the sighted and the blind, and the realities of their lived world that sometimes run into real or imagined conflicts with each other.

In a speech for the American Foundation for the Blind delivered at Washington, D.C. in 1925, the famous blind writer Helen Keller said, “The chief handicap of the blind is not blindness, but the attitude of seeing people towards them.” Sparsh deals with the same issue, but brings new insight into it from the perspective of the individual characters because blindness is not a dry idea, it’s the lived truth of the blind, and the blind have more ways of ‘seeing’ their blindness than the sighted can ever even imagine. To some very self-respecting blind people, nothing is as hurtfully demeaning as the display of sympathy. Anirudh Parmar (played brilliantly by Naseeruddin Shah) is one such person.

When Anirudh Parmar, led by the melodious voice of Kavita Prasad (Shabana Azmi), lands at her doorsteps instead of his doctor’s, where he had started out to be, the two meet for the first time, and Anirudh does not fail to compliment Kavita on her singing before taking her leave. Kavita, a recent widow after a three-year long marriage, lives a secluded life and has just one friend, Manju (Sudha Chopra), and it is at a party thrown by Manju that the two meet once again.

Anirudh tells her that he runs a school for the blind children and the one thing that they need more than the donations is the time of the people, which most of the people are a little too stingy about. He requests Kavita to come over to his school to spend some time with the blind children teaching them to sing, to which she remains non-committal initially, but eventually turns up at Anirudh’s school to lend a helping hand. Anirudh makes it clear right at the outset that he and the children were looking for help and not pity when Kavita inadvertently uses the term ‘ bechaara ‘ (Hindi for ‘pitiable’) in connection with the blind children. The reaction to being treated with sympathy evolves into the central theme of the movie as the story unfolds.

Kavita finds meaning in contributing towards making the world of the blind kids richer while Anirudh finds an able and willing associate in Kavita. But somehow Anirudh cannot help seeing Kavita’s doing so much for the children as a major favour to him and them, which he appreciates but is also uncomfortable with at the same time, particularly when Kavita starts taking care of him as well. Kavita proposes a simple solution to Anirudh’s discomfort – that they combine their respective darknesses to create a world full of light together. In short, tie the knot. Anirudh gives it a serious thought but he has his own fears, the foremost of which is the fear of her becoming a habit and his losing his hard-gained ability to survive and live independently with and despite his blindness. Anirudh’s obsessive rejection of pity makes his world and the people in it more full of pity than anything else. He manages to read the same in Kavita’s affectionate overtures, too.

Needless to say that Anirudh fails to see that seeing everyone as pitying him is by itself a reflection of self-pity. He accuses Kavita of seeking a sense of sacrifice and martyrdom in marrying him when Kavita’s only friend Manju comes over to make him understand that in doing all that Kavita did for him she was motivated by love alone. She further adds that he doesn’t need her as much as she needs him. Seeing a blind boy read out to his sighted friend from a book trascripted into Braille by Kavita, Anirudh is touched by the role reversal and realizes that all bonds between the sighted and the blind are not founded on pity; some of them are steeped in genuine affection, too. The movie closes with Anirudh walking towards the house of Kavita as her singing voice fills the air.

Sparsh is the story of a self-respecting blind man’s struggle to gather the courage to drop his aggressive defenses. He acknowledges the deficiency, but does not want people to help him out of pity under the mistaken assumption that pity arises out of a sense of superiority, which his pride does not allow him to accept. This is also why Anirudh sounds jarringly egoistic at certain places and tries to prevent his rough and sharp edges from hurting someone. Of course, he doesn’t succeed all that often. One would see the reflection of an angry Anirudh of Sparsh in the Jindal of the typical Bollywoodian Mohra some 14 years later in 1994, where Naseeruddin Shah plays, in part, the same kind of self-respecting, sharp-tongued, easy-to-provoke blind man once again, except that this time the man is neither good, nor blind with no inner battles to fight and no internal conflicts to resolve, unlike Anirudh.