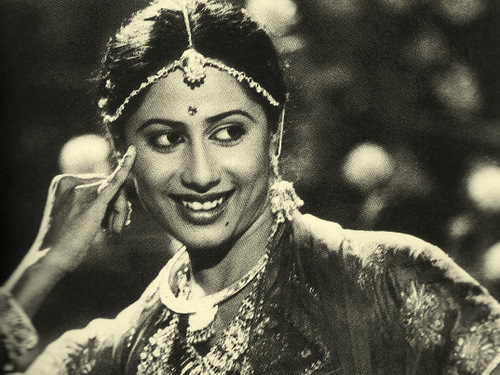 The roles that human beings play in their lives are not too different from the way an actor essays a character in a movie or a play. One might argue that the difference lies in the ‘reality’ of life and the ‘make believe’ nature of plays and movies. That perhaps is a major perceptual mistake. Most of our real life is founded on the conceptual constructs of our own making. And it is by adjusting into the mould provided by the world that we spend our lives. At many levels our lived life is founded on the ‘make believe’. The question of ‘reality’ is too complex to be discussed at length here, but Benegal’s ‘Bhumika’ puts the real life side by side with the make-believe life of the movies. And in the background Benegal tells the story of an exploited actress, the actress turns out to be only a little more of a victim than the others around her, including her exploiters. That happens not because people are fair or less unfair to her. It happens because the only role that she refuses to play is that of the victim despite being the victim of her circumstance, but being a victim of one’s circumstances is nothing unique. We all are such victims, and the same set of circumstances that turn us into victims also present the opportunities for us to live a satisfying life. The same is true for the protagonist, Usha (Smita Patil), as well. She gets to make her choices, and it is primarily the choices that turn things in her favour and also against, much the same way as it works for the rest of us.

Usha’s husband, Keshav (Amol Palekar), is much older than her, and had lusted after her since she was a little girl. Taking advantage of the family’s circumstances, and in the garb of supporting the family, he manipulates things, gets her into films and then marries her. She has no real feelings for her husband, to start with, but she takes the role of the wife and wants to play it in the conventional fashion. She has no personal ambitions. All that she wants after marriage is to be a homemaker. What surprises her is her husband’s insistence on her continuing her career in films, which is fundamentally because he is not working, and prefers being a parasite. He keeps managing her career by getting her films with stars, and she becomes a star herself, but that is completely unfulfilling for her. Her reluctance and his ambitions with her come in constant clash, especially after she becomes a mother.

The gulf between the couple widens and results in her leaving the matrimonial household, which aggravates her sense of loneliness and isolation. She tries to fight her loneliness by entering into a relationship with a nihilistic director, Sunil Verma (Naseeruddin Shah), who has intense fascination with death, and then with a patriarch, Vinayak Kale (Amrish Puri), who has everything for her except freedom. And she carefully avoids getting into a similar relationship with her longstanding co-star and a constant source of support, Rajan (Anant Nag). Rajan remains romantically interested in Usha right from the time she starts working with him in the movies, but she keeps her distance from him for both professional and personal reasons. As the relationship between her and her husband bitters further, she still does not let the romantic overtures from Rajan drive her into a relationship with him and even turns down a marriage proposal from Rajan saying that she does not want to lose him, like she lost everybody else, because he had been the only person who had given her without asking for anything in return.

Usha is not a submissive woman. She is assertive, and does not like being forced into anything. What she demands is a right to make her own choices, right and wrong, good and bad. Much of what happens to her is indeed on account of the choices she makes, but most of her choices are made as reactions to force. Even her decision to marry Keshav is driven by her mother’s insistence on her not seeing Keshav any more, which is unacceptable to her, not because she wants to meet Keshav so much, but because she dislikes being forced. She reacts by not just agreeing to marry Keshav, but actually insisting with Keshav to tie the knot. But her desire to be a housewife and abandon her career in films does not meet the approval of her husband, who cajoles her into continuing, and then keeps suspecting her fidelity, which becomes the cause of frequent fights between the couple.

To conclude that it is her revolt against the emotional manipulations of a possessive, needlessly suspicious and utterly selfish husband that drives her into the arms of other men would be a little too simplistic. What complicates life for her is her reaction against her being made to function against her wish combined with her will to fight for a perfect life with a man pitched against her relentless fight to protect the interests of her daughter. At different times different things take precedence in her life, which makes her a normal, vulnerable human being instead of a steely crusader for a cause.

Keshav, her husband, forces her to abort her second child stating plainly and simply that he has no place in his house for the child fathered by someone else. She tries her best to convince him that the child is his, but to no avail. And from the omniscient perspective of the audience we know that she is not lying. On his side there is no fight, no rage. This is not an angry, possessive, insecure and jealous husband angry over his wife’s infidelity. This is an opportunist man living with a woman under the institutional cover of marriage, which he considers an arrangement for mutual benefit. He has already given up on his marriage and his wife. He is interested only in getting the best out of the bargain.

Right after her second child is aborted, she hastily enters into a relationship with one of her directors, Sunil Verma. Of unconventional and unorthodox mindset, the man seems intellectually stimulating, but the relationship flashes in and dies out in a jiffy. There is not enough depth and commitment in Sunil to sustain the relationship that Usha had been looking for. After the flash-in-the-pan fling with Sunil that comes to nothing, Usha moves quickly to Vinayak Kale in search of a stable relationship, and with Kale she pretty much finds one. She gets a stable, resourceful household with a kid in it and for a while she is happy enough being the de factosecond wife of Kale to forget her own daughter, Sushma. But there is a price to be paid, as she realizes later. She does not have the freedom she has been so used to. She can’t even step out of Kale’s palatial estate. She is a prisoner, who rules the insides of the prison, but is condemned to spend her life confined in her palace-prison. Usha is not ready to pay a price that high. She sends a distress letter to Keshav, who brings the police along and Usha is freed. But in the meanwhile a lot has changed, and almost nothing is the same. Keshav’s business is now set; Usha’s daughter, Sushma, is now married, and she and her husband want Usha to live with them. Usha declines. Rajan calls and wants to meet Usha, but she doesn’t respond. Benegal leaves the audience to draw their own conclusions. But it’s not very hard to gather Benegal’s unmistakable suggestion that Usha’s quest for a ‘home’ with a man has resulted in the realization that a perfect home is hard – if not impossible – to find because it is very hard to find a perfect ‘husband’. Benegal seems to have summed it up when the paralyzed first wife of Kale tells Usha that masks change, beds change, but men do not. Finally, Usha decides to look beyond men and find a fulfilling life without them. That’s where Benegal sends the curtains down.

GANGS OF WASSEYPUR – II: Neat Finish To A Clumsy Start