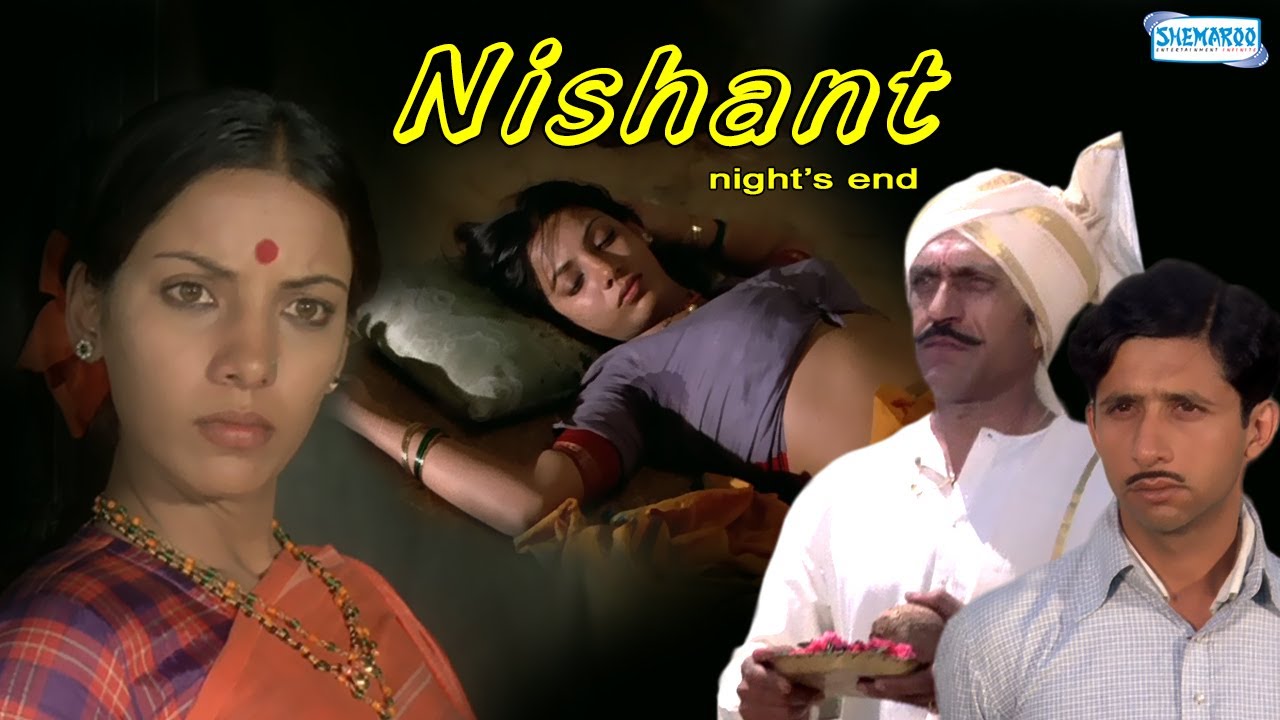 Those with means and influence tend to be adamant and oppressive apart from being almost completely indifferent to the miseries of the less-privileged. Feudal India with its notorious landlords was a society in which power and money were concentrated in those few hands that did not hesitate in brutally squeezing the poor and the weak with or without reason. The excesses were tolerated solely because individuals and even state institutions were powerless against the mighty zamindars . But then, one didn’t necessarily have to be dirt-poor to suffer at their hands. To invite violence and oppression from their side one only had to have something that they wanted, and that ‘thing’ could be someone’s wife to whom one of them took fancy, which is precisely what happens in Nishant . However, the oppressor, drunk on his might, might fail to note when and where the threshold was breached, in which case the backlash might sometimes be a little too strong to stand. Huge fires, many a time, begin with an innocuous spark. Nishant or ‘end of night’ is the story of one such spark and its blowing into an unforgiving, violent uprising.

Directed by Shyam Benegal and cinematographed by today’s much admired film director, Govind Nihalani, Nishant — released in 1975 — was the first movie featuring Naseeruddin Shah, who went on to become India’s finest actors, in a widely lauded performance alongside the equally impressive Girish Karnad, Smita Patil, Shabana Azmi and Amrish Puri. This was Smita Patil’s second movie after her debut in Benegal’s Charandas Chor , which was also released in early 1975.

The film is set in the times around Indian independence when India was taking its unsure baby-steps in the post-war world of sovereign nations. The feudal system was still well-entrenched and nobody believed that anything in terms of social structure was going to change anytime soon. A schoolteacher, in such a setting, might not be the weakest soul to shatter or the ideal human rock to test one’s raw strength against, but, with a pretty wife at home, he might be among the unluckiest. So, when Vishwam (Naseeruddin Shah), the youngest and the most gentle brother of the powerful zamindar , sets his eyes on the school teacher’s wife, his brothers make a gift of her and present it to him. Being married already, of course, doesn’t come in the way of his accepting the affectionate ‘gift’ by his caring brothers.

Despite being the brother of a landlord who wields unlimited raw power and crushing control over the lives of the people of the village, Vishwam, unlike his brothers, is not overbearing or drunk on power. He is an ordinary man in an extraordinary family. And for the most part he is quite happy with his wife and whatever else he has. He never comes across as ambitious on any front whatsoever. The only thing he does that falls in the league of the everyday misdeeds committed by his kind is covet another man’s wife. He never really asks his brothers to do anything to get the woman in his arms; neither does he look inclined to try anything adventurous on that front. But when begotten for him, Vishwam does not hesitate in taking the schoolteacher’s wife, Sushila, as his mistress. However, he is still not the kind of animalistic rapist that his brothers are perfectly capable of being at any hour of any day. On the contrary, he displays a certain amount of care and emotions for Sushila, which gives the impression that he either genuinely loves her or feels something for her that very closely resembles romantic sentiments. Benegal spends a good amount of run time on building Vishwam’s character as a good guy trying hard to fit into the accepted mould of bad, and Benegal makes it very probable that in part Vishwam accepts Sushila as his mistress just to prove that he was also just as bad as his brothers.

The helpless schoolteacher is left with his insufferable agony, barren rage and a deep sense of injustice apart from his motherless little child much in need of the mother. He runs to everyone from the villagers to the police seeking assistance against the powerful landlord, but nobody is willing to risk inviting the displeasure of the zamindar . Even the police looks the other way for the same reason. They try being helpful by gently advising him to reconcile to the fact that his wife was never coming back to him, for she now belonged to the zamindar family. Her grand elevation from being the wife of a schoolteacher to the mistress-hood of the landlord’s youngest brother is somehow tolerable, if not perfectly alright, with the villagers. They quickly get into the what-happened-happened mode of consolation that people generally reserve for untimely deaths, and the typical ‘wish-of-god’ part stands conveniently modified to ‘wish-of-the- zamindar ‘.

The zamindar family ignores, to their own detriment, that the discontent born of injustice does not die an easy death, and a helpless acceptance is not the same thing as approval or endorsement. It remains in public memory like a deep, burning scar, and no matter how weak, timid and poor the people be, the sense of injustice is a hugely uniting force. The bonds of hatred are sometimes stronger than ties of blood. So, while the injustice is not overtly resisted despite passionate appeals from the schoolteacher, the outrage remains simmering under the surface, which eventually boils over and produces a violent backlash.

Although Nishant is primarily a story of a schoolteacher’s struggle against the tyranny of a powerful landlord, it is also a tale of class divide and a comment on the nature of all revolutions. Longstanding discontent has always been the most effective fuel for an uprising. Benegal does not shy away from recognizing the unforgiving nature of such backlash. This is not a fire of justice, for it exercises no discretion. It does not right the wrongs, but cleans the slate for a fresh start. So, all that is good about the bad is also wiped out, which is why when the villagers set out to kill, they do not spare the wife of the schoolteacher either. She is part of the household that invited the ire. She must suffer the onslaught just as much as any other belonging to the same household.

At personal level, the schoolteacher is thrown in the situation where his wife has been abducted and he is helpless. He can do nothing except come to terms with his humiliating circumstances and accept brutal injustice as a way of the world, as an undeniable, inescapable reality. His wife’s position is even more difficult because she has to adjust not only with the absence of her husband and the child but also with her new surroundings, which are innately oppressive on account of having been forced upon her. Ironically, she finds solace in the wife of the person whose mistress she ends up becoming. Eventually, hopelessness sets in to make her accept her fate, and she becomes an unwilling part of the zamindar family. In giving up and giving in she is very unlike her husband, who never really gives up on the fight and never accepts the feudal oppression he faces as his unavoidable fate. In presenting this contrast Benegal brings to us these two ways in which people respond to the tragedies they face at the hands of other human beings.

Benegal’s Nishant carries a message that needs no re-affirmation and yet it needs to be re-affirmed over and over again simply because we tend to overlook the obvious for short-term gains. Perception of injustice is the greatest and the most viable threat to established order, and much of the large scale unrest anywhere is caused by the sense of oppression. The principle of Rule of Law is fundamentally aimed at preventing arbitrariness so as to prevent discontent from taking roots.

The movie ends with the lynching of Sushila and Vishwam by the mob after they try to run away and hide, but are spotted. Sushila thinks of her son in the last moments of her life. The final scene shows the son of Sushila and the schoolteacher waiting in a classroom with other students for his schoolteacher father to step in and begin teaching. Clean slate. New beginning.