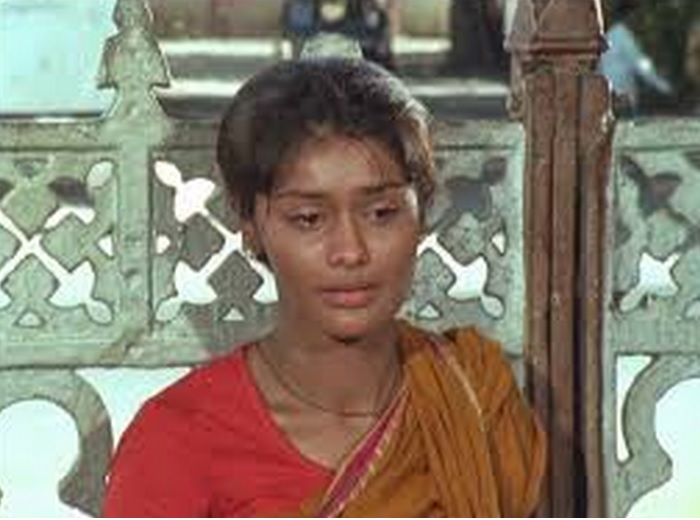 A terrifying knock at the door of a young girl (Pallavi Joshi) sleeping alone in her small hut in a thickly populated ghetto with similar huts all around sends shivers down the spine of the young girl, whose mother has gone away to meet the girl’s father (Paresh Rawal) on the girl’s adamant insistence fuelled by the tenacious hope that the man – now a very successful politician – would recognize the woman he has a daughter from, and the family would re-unite and this shivering girl would get her doting father back. To the woman (Neena Gupta) – the girl’s mother – currently far away, it is nothing but a faint hope founded on the wafery assumption that the love of the father for the daughter and the daughter’s mother would somehow stand firm and strong against the formidable force of the powerful ambitions of the father that made him abandon the two women he apparently loved in the first place in search of his true place and worth under the sun. The mother is right. And the father does turn out to be too weak to sacrifice his position and name for the sake of his woman and the daughter. He had exercised that choice long ago when he had left them behind to fend for themselves. The knocks on the door grow urgent. With the father and the mother gone, the young girl has to deal with the human lust-vultures on her own. It’s time to learn the rules, time to adapt and time to trust skeptically.

The knocks on the door stop when a few of the neighbours intervene, and the guy is beaten up, not for harassing the girl but for misbehaving with the interveners. But there is a second knock. This time it is the mother who had been sent by the daughter to meet the father. She returns drunk after having met the father and his family. She also gets to know that he built his future on the foundations of his buried past. The past cannot come back to life again, for that could seriously threaten the present, the status quo . The politician – being the shrewd politician that he is – deals with the situation with requisite talent and prevents his past from jeopardizing his present. And no, this is not a movie about a wife’s struggle to get her husband back from the world. It is a lot more realistic than that, which is to say it is not about ‘a woman’s’ struggle against the world for her man, but is about the struggle of ‘the women’ to live and to have their fair share of it. It doesn’t come easy, for it has to be fought for. However, all battles are not won. Not because they are the wrong battles or are the battles for the undeserved or undeserving, but simply because the odds are too big and too many to fight against.

The mother, Geeta Devi (Neena Gupta), takes to drinking after having her hopes shattered; the daughter, Apsara (Pallavi Joshi), has to now live without her and without anybody to support her in world full of bad people, but this is also the world that has a few genuinely good people like the widower (Om Puri) of 15 years who selflessly supports Apsara, and gets her out of her wholly insecure hutment colony to live with him. The two marry later and for a short while Apsara gets a happy, stable life, but before it gets real enough for it to be her life, the old gentleman dies of sudden heart attack and the family blames Apsara for the death landing her in the police station. She is let out for want to evidence. She has lost all that she has ever had except for one thing – the love for her father. But before that there are other pressing concerns, like keeping body and soul together, for which she has nothing but her body to sell, which she does for a while before deciding to go to the national capital to try meeting her father.

She comes to New Delhi, and starts staying in a decommissioned train coach near the railway platform and befriends three other children living in much the same condition. She gets to know that her father is about to address an audience, and when she fails to attract his attention to her at the railway station, she presents herself at the conference waving at him and telling him out aloud that she was his daughter, in the hope that the father who left her and her mother would somehow become father enough to accept her back all of a sudden that publicly and put the career he gave up so much for on the line for no good reason except for the love of his daughter, which was part of the baggage he had dumped along the way a long time ago. She is dragged out of the auditorium and thrown out like a bag full of garbage. It is only then that she realizes that she had been abandoned for good the day her father stepped out to never return. Never returning and never taking back was part of the original choice he had made and she had no option but to accept it and live with it, or try harder and make things difficult for her, which she does and never gets to know when she went too far with it. While she is walking down the railway track, in shock at complete rejection and complete loss of the last hope she had held on to, an assassin sent after her by her influential father pounces upon her from behind and slits her throat to leave her bleeding to death, gasping for breath on the green grass by the railway tracks with nobody around and no help coming. The abandonment couldn’t be more complete, more conclusive and more heartless.

The uncompromising and cruel realism of the movie steps up the odds for Apsara and makes her suffer as much as anybody in her circumstances could everytime it seems that she might end up happy. The fortune beams upon her in quick flashes amid huge chunks of miseries splashed at her until she is too completely drenched in her sorrow to detect the death creeping up from behind to finally end her miseries in a quick slash. After a point, one starts expecting a new tragedy for Apsara, each time more tragic than the last one. And the movie doesn’t disappoint, which might itself be quite unrealistic, but in the skillful hands of Shubhankar Ghosh it passes for a realistic fare perhaps because we do understand that since life is unpredictable, it can always hand down an absolutely rotten fate to someone for no reason at all. The feel of the movie and the way the narrative progresses are realistic enough for one to readily forgive a competent director a few minor excesses. Life, after all, is not all that fair, and in its unfairness it might sometimes be excessive. And for a young girl left alone with no support, life can be excessively cruel a little too often.