GANGS OF WASSEYPUR – II: Neat Finish To A Clumsy Start 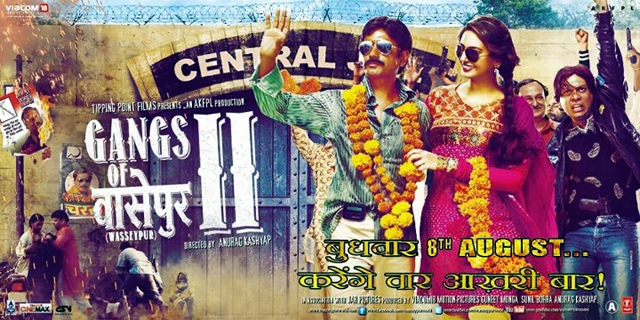 When Indian heroes, led by Angry Young Man Amitabh Bachchan, turned superhumanly powerful and invincible, the mainstream Indian cinema became the wonderland of all kinds of possibilities with the ever-raging battle between good and evil thrown in, in which the good always triumphed, and the only thing left to be enjoyed was the trajectory it followed to attain the final victory because the ends were always identical. The mainstream Indian cinema thus turned into an escapist fare and the serious filmmakers turned to what they considered the ‘real issues’ and real-life social concerns crying for redress. That was the beginning of realist cinema in India. The reality had to be shown in its actual starkness so that the audience took note of the urban and rural underbelly and could empathize with the suffering humanity. Movies like ‘Mandi’ and ‘ Bazaar’are the product of such realism. While there was realism, there was art, too. It was not camera-turned-to-the-street kind of realism. It was about recreating the real artistically without losing sight of the purpose.

From then to now, Indian cinema has changed a lot in terms of on-screen realism. The objective itself has changed. It is no longer to bring reality to the audience, but to give the film that ‘arty’ look and feel that the critics and pretentious ‘intellectuals’ dig. Worse, realism has come to be used for its shock value. And amongst the worst instances of such mindlessly unartistic experimentation with realism of the grossest kind ‘Delhi Belly’stands out. ‘Gangs of Wasseypur’ does not overdo realism to that extent and in that manner, but it manipulates realism to strategically plant shock-nuggets in order to create the illusion of new reality. However, Director Anurag Kashyap manages to pull it off thanks to ‘Gangs of Wasseypur – II’and Siddique’s scintillating performance. The second part is by all means a major improvement on the first in nearly all departments, including acting and direction.

The first part ends where Sardar Khan is killed, and the second part picks it from there. Sardar is survived by his wife (convincingly played by Richa Chaddha), four sons from his wife and one from his mistress, Durga (Raima Sen). Danish is the eldest and steps into his father’s shoes right after his father’s murder, beginning by killing on the spot the only one of Sardar Khan’s killers caught on the scene by the people. He reaches the spot and shoots him right there in front of the police before walking away with the policeman watching him kill and leave. Thereafter Danish goes on brutally killing every single person involved in the murder of his father until he is himself killed by Sultan Qureshi at the doorsteps of a courtroom as Danish steps out of the court after a hearing.

Faizal – played admirably by Nawazuddin Siddiqui – is too weak to be expected to do anything worthwhile. He is forever stoned, and shows no sign of the toughness required to run a mafia enterprise. But when Fazlu, his long-time friend, wins the local election and Faizal goes to congratulate him, the audience is given to realize that Faizal has figured out as to how his father was killed. Faizal has a good idea of Fazlu’s role in the killing. And we see Faizal slash Fazlu’s throat against the evening darkness in the backdrop. It’s a remarkable scene in terms of the visuals. Kashyap cans the scene in long shot showing the silhouette of the two men with one slashing the throat of another over and over again. The unmistakable sound of throat-slitting and thick drops of blood – which look a shadowy black from afar – flying around give the scene a damp, dark feel. It is certainly the best shot scene in the movie, both parts included. It marks the beginning of Faizal’s career in crime. Faizal marries his love interest, Mohsina, and settles down. The tale of Faizal’s finding his feet, gaining complete control over the crime syndicate of the family and concluding his love story with marriage, comes to a neat closure early on. The plot gets a bit knotted up thereafter giving one many general ways of looking at what follows in terms of storyline.

Sardar Khan’s primary character flaw was lack of focus with plenty of lust-led digressions going for him. And one of the more serious digressions returns with a lethal sting – Durga. Faizal gets to Fazlu’s betrayal but fails to track the chain of deception further down to Durga, which proves fatal in the end. Faizal inherits his father’s lack of focus. Like his father, he isn’t a thinking gangster. Complacency comes naturally to him, too. His distraction is not women; it’s easy money. And he pursues money with the same mindless fervour as his father pursued women, and quite the same way his passion turns lethal without his ever realizing it. In the end Faizal pays the price for his father’s mistakes worsened by his own. Faizal’s half brother and Durga’s son, Definite, is a clever and focused opportunist, which works well for him in the final reckoning. No lessons – moral or otherwise – can be drawn from the movie, for the only thing that the movie seems to suggest in terms of a lesson is that evil begets evil. But sending a moral message is clearly not on the Director’s list of objectives. Kashyap wants to tell a story, and he manages to do that a lot better in the second part than the first one, or perhaps it so appears because he did a better and neater job of tying up the loose ends than laying out and detailing the plot.

Sardar Khan and Durga’s son, Definite, has more of Durga in him than his father, which makes him a lot fitter to survive the world of deception than his own father and any of his half-brothers, including Faizal, whose lust for quick money makes him prone to deception from multiple sides. Faizal does learn to distrust people, which helps him a great deal for quite some time, but one cannot distrust everybody at all times. With Definite’s assistance Faizal manages to get to Ramadhir Singh, and pumps countless bullets in his body, and then fires a lot many into his dead body. Definite keeps helping Faizal all the way till the end of Ramadhir Singh and keeps gathering his trust, thereby reducing the chances of error like a skilled ambush predator waiting for the prey to come within a sure striking distance. And just when Faizal has no reason to suspect Definite, the latter shoots him dead as part of a larger conspiracy between Definite and Ramadhir’s son, J.P.

Ramadhir Singh survives as long as he does solely on account of his dispassionate, impersonal and calculated approach to crime and politics. His impression of his son, J.P., as good-for-nothing proves fatal when J.P. pulls off a conspiracy with Definite, and the two wipe out both the sides by well-calculated moves to emerge at the top.

The game-changer in Kashyap’s jungle-like Darwinian universe of crime is effective deception and predatory stealth. For a successful deception, trust is indispensable. So, building trust only to shatter it at the most opportune moment is the most useful skill. On the other hand, trusting the wrong person for the wrong reason is life-threatening in this world where even blood doesn’t run quite as thick as it is supposed to. Both Ramadhir Singh and Faizal die on account of misplaced trust. Faizal’s mistake is obviously more glaring than Ramadhir’s. But death doesn’t make such fine distinctions.

Kashyap, for all his lapses in the first part, manages to tell his story and make his point quite well at the end. Let’s just say it didn’t end as bad as it started. Of course, nobody is complaining.