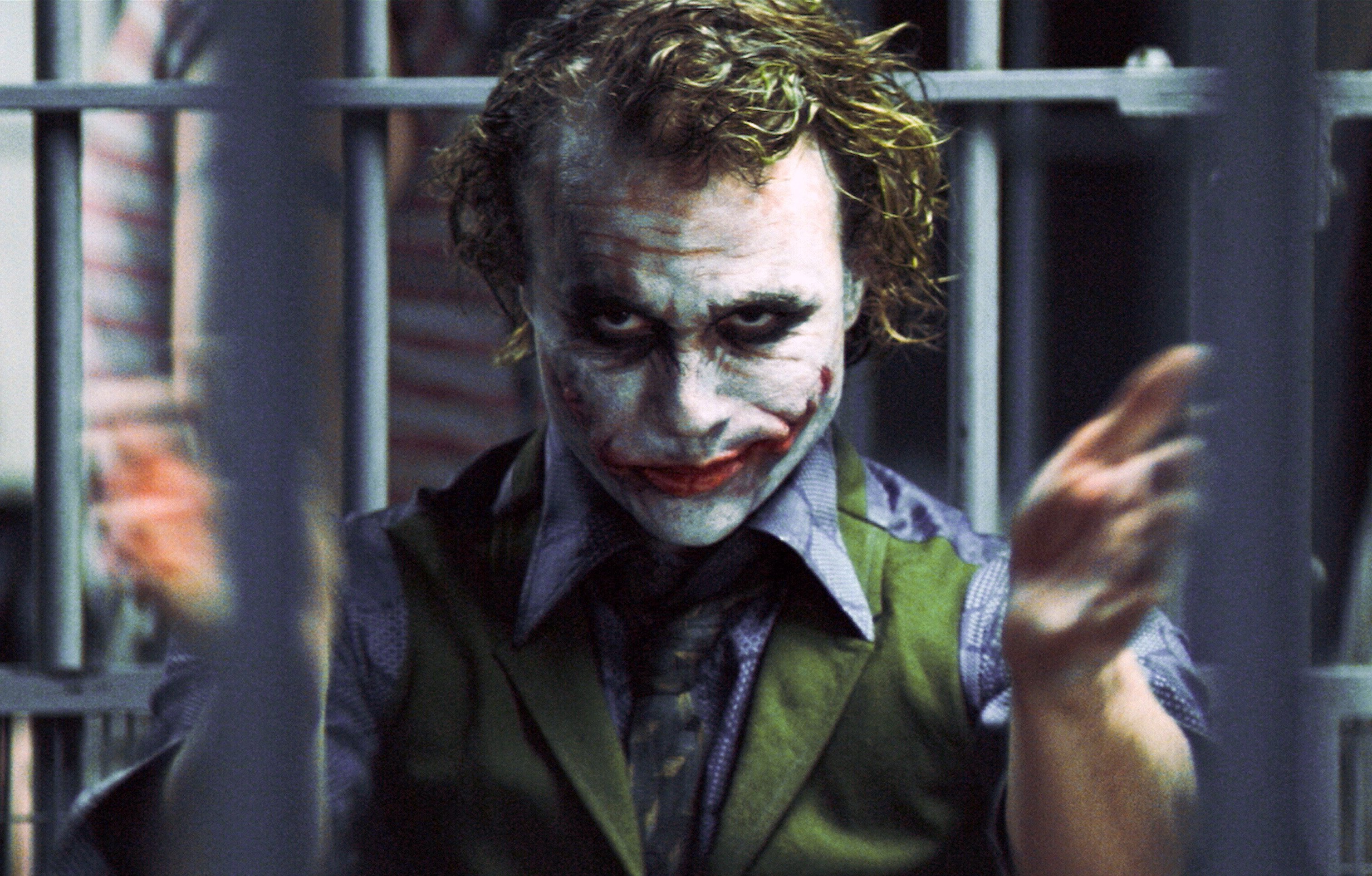 In this image released by Warner Bros., Heath Ledger starring as The Joker, is shown in a scene from "The Dark Knight." (AP Photo/Warner Bros. Pictures, Stephen Vaughan) ** NO SALES **

The Dark Knight is doubtlessly a cinematic masterpiece and the Joker is by all means one of the most intriguing negative characters to have ever come to life on the silver screen. The movie is remarkable not only in terms of characterization, but also because it deals with eternal human struggles once again without looking, feeling or sounding stale.

The plot has Batman — the masked vigilante of Gotham City — called upon to reveal himself by an eccentric villain who calls himself ‘Joker’ and wears a fitting make-up. The Joker holds the city to ransom and squeezes it in order to force Batman to take the mask off and step into the light. Joker’s single-point agenda is to destroy Batman’s cover. But the plot of the movie is not as simplistic as to have Batman pitched against a formidable villain with several clashes sprinkled throughout and a major showdown arranged towards the end with sparks flying to wrap things up in a well-rounded, emotionally satisfying denouement.

The fight is not so much between Batman and the Joker as it is between the strength and vulnerability of human spirit itself. Director Christopher Nolan introduces District Attorney, Harvey Dent, who is more than willing to take the mantle from Batman in defence of Gotham, for he believes that it is high time public authorities took upon themselves to protect the citizens of Gotham and wage war against crime instead of leaving crime fighting to Batman alone. Dent surmises that even Batman himself must be looking for someone to give it over to because he could not continue battling crime forever, and Dent is not wrong there, which is clarified when Bruce Wayne (Batman) says, referring to Dent, that Gotham needs its ‘true hero’.

The cold, calculative, eccentric and reckless Joker is the dark force Dent is given to fight apart from the massive organized crime cartel. Dent represents Gotham’s common man and also the spirit of the people of Gotham to collectively stand against organized crime. The Joker, on the other hand, banks upon the selfish cowardice of the fundamentally weak people. The violent and greedy gangsters presiding over organized crime figure just a notch down from the common people of Gotham on Joker’s moral barometer.

The Joker was first enlivened on cinema screen by none other than a masterly Jack Nicholson performing at the height of his craft in Tim Burton’s Batman (1989). The Dark Knight brings Heath Ledger’s interpretation of the Joker to the celluloid under Nolan’s direction. Ledger kept himself in seclusion at a hotel for over a month as he tried to get under the skin of the legendary Joker working on his personality, posture and voice. Reportedly, Ledger also kept a journal to record the random reflections and feelings of the Joker while he tried to step into the character’s shoes and try thinking and acting like the Joker would in any set of given circumstances. After all, he had the much celebrated Jack Nicholson to match, which he certainly managed to do and sometimes even outdo quite convincingly. Joker’s make-up was also Ledger’s own, and in the Gotham Hospital scene, the Joker is shown to have some of his make-up on his hands suggesting that the Joker puts on his make-up all by himself.

However, it is unfair to compare Nicholson’s performance with Ledger’s, for Nicholson did not have much to base his rendering of the Joker upon whereas Ledger had Nicholson’s to start with. However, suffice it to say that Ledger’s performance as Joker is one of the finest ever in Hollywood, for which he also received an abundantly deserved Academy Award posthumously. The sinister villainy that Ledger brings to the Joker not only puts him in the league of the world’s finest actors, but also sets a benchmark that would be hard to match for the actors essaying villainous characters for a long, long time.

The most perplexing and perhaps also the darkest aspect of the Joker is his nebulous motivations. What drives his single-minded pursuit of chaos remains an enigma. He doesn’t seem to be pursuing a cause or an objective or an ideological end, but appears to be acting out his nature. So, he is not really doing anything, but is simply being himself. There is no dichotomy, no paradox that could be the source of any self-doubt in him.

“Do I really look like a guy with a plan? I am a dog chasing cars,” says the Joker in the well-known and much admired Gotham Hospital sequence. “I just do things,” he adds. Therefore, while at one level he appears to be pursuing a certain goal, howsoever vague, at another he is simply following his instinctive drive.

However, the Joker has his own understanding of human nature, which is far from flattering. “When the chips are down… these civilized people… they’ll eat each other,” the Joker tells Batman in the Interrogation Room sequence. The Joker is not an ordinary thug looking to steal, rob and kill. He has a sophisticated belief system founded on the assumption that human beings are selfish, greedy, mean, cruel and indifferent creatures, who would do anything for their individual gain even if it results in a disproportionately severe damage to someone else.

District Attorney Harvey Dent is hope, which is well reflected in his courageous willingness to take up the cudgels for Gotham against organized crime, and his aspiration to take over from Batman in fighting crime so that Gotham has its public authorities and elected representatives fighting the evil instead of the masked vigilantes. Harvey believes, and Batman (Bruce Wayne) agrees in principle, that keeping Gotham City crime free is primarily the responsibility of the public authorities, and the existence of a crime fighter masked vigilante in Batman is indicative of the failure of the law enforcement machinery. Dent wants to reinstate the faith of the people in the rule of law, and the law enforcement machinery of the State, and Batman is more than willing to let the Gotham City take care of itself. So, Bruce Wayne as the businessman he is, and also as Batman, does his best to support Dent’s endeavours in that respect. On the other hand, to the Joker Dent is that white spark of goodness that he doesn’t believe people have. His primary project, therefore, is to take the White Knight of Gotham and “bring him down” to his level turning him into the ‘Dark Knight’ to show that “madness is like gravity; all it takes is a little push”.

Unlike Tim Burton’s Batman (1989), The Dark Knight brings to us a fully-formed Joker without any reference to his background, with nothing to hint at the reasons that went into the making of this absolute villain. Why is he after Batman and what motivates him in his pursuit of Batman’s destruction is also kept unclear giving the Joker his much admired, mysterious darkness. Pennyworth (Michael Caine) is absolutely right when he tells Bruce Wayne (Batman) that neither Wayne, nor the gangsters who took shelter with the Joker against Batman fully understand the monster. “Some men just want to watch the world burn,” Pennyworth observes. When, during the interrogation sequence, Batman asks why he wants to kill him, the Joker bursts laughing. “I don’t want to kill you. What would I do without you?!” The public authorities and the gangsters, much like the audience, do not understand the Joker simply because his motivations are not just uncommon but almost unique, his method a little too drastic and his ideas bordering on crazy. But at the bottom of it, there is the belief that human beings are a hypocritical and easily corruptible species with a phony moral code that they pretend to honour. On the other hand, Batman believes in the fundamental goodness of human beings and their ability to stand against all odds in selfless defence of others even at the cost of their own welfare. And when the innocent civilians in one ferry and the convicted criminals on the other make independent, unilateral decisions to not blow up the other ferry to save themselves without knowing if the other one would also do the same, they prove that, contrary to the beliefs of the Joker, human beings are capable of selfless sacrifice of the supreme kind. Batman wins, but the Joker does not lose either, for he does manage to turn Gotham’s white knight dark.

“This is what happens when an unstoppable force meets an immovable object,” says the Joker hanging upside from a skyscraper. “You are truly incorruptible, aren’t you,” he adds. Except when speaking to Batman, the Joker is either pushing an agenda, entertaining himself and telling another untrue story about how he got those scars but is never really talking or telling anything substantial about himself or about his real objectives. He only reveals himself to Batman, for he understands that apart from the masked vigilante, who is his chief opponent, there is nobody who can understand any of it. Besides, he sees no point in revealing his real self and objectives to anybody else, for, to him, an absolute villain, which he certainly is, can only be understood by an absolute hero, which he understands Batman to be. He considers himself an unfailing corrupter and Batman as absolutely incorruptible. So, his fight with Batman is not aimed at killing Batman but at defeating him by breaking the spirit of the people of Gotham City and pushing them into doing monstrous acts thereby displaying the evil the Joker thinks they carry within themselves under the deceptive veneer of civility.

The regular good-versus-evil-and-the-good-wins routine gets a minor but significant spin at Nolan’s hand, and the triumph of good over evil is not quite as comprehensive as one might expect going by the past tellings of such tales. Batman and Commissioner Gordon arrange a hero’s farewell to Harvey Dent, who actually doesn’t die a hero, so that the people of Gotham continue to believe in the goodness of human beings. But this also suggests how, for the very noble purposes of preserving the good, the real tales of ‘good men’ are carefully tweaked to keep popular faith in the conventional ethical norms. But then, every now and then, there is always an absolutely incorruptible Batman. And hope lives on.