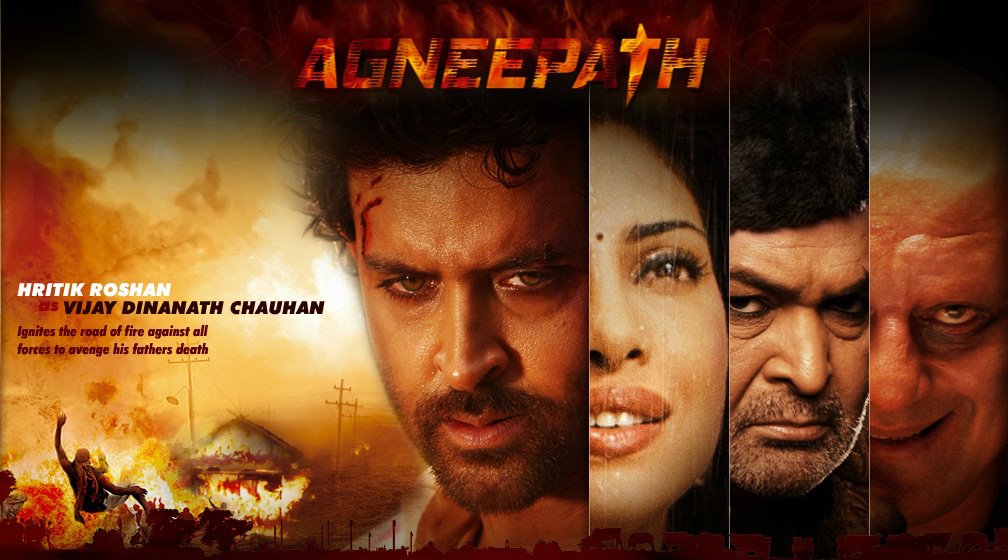 Greek gods don’t walk the path of fire; it takes an angry, never-old man, sore and coarse from a long, rocky life of raw deals. And muscles might look ‘pretty’ and ‘sexy’ — whatever that means — and ‘pretty sexy’, but they don’t necessarily look menacing or dangerous, particularly when all ‘chocolate boys and men’ of Bollywood now wear muscles like there was a dress code demanding it.

So, when Hritik Roshan is introduced biceps-first, the regular Bollywood melodrama instantly kicks in sending the bare-knuckle realism of the original out of the window, flying. Soon enough we have a Vijay Chauhan that is not just unlike the original — “Vijay Deenanath Chauhan, poora naam” — but is also several shades less imposing and a lot more foolhardy. Hritik Roshan does not look the part in the least and completely fails to carry it despite the unmistakable ‘echo effect’ used to assist his unfitting dialogue delivery.

The first thing that every actor needs to overcome is the limitations imposed by his or her looks allowing the character to emerge effectively, which Hritik Roshan has completely failed to do over the years. The intense scenes in Agneepath (2012) remind one of Hritik’s performance in ‘Fiza’, particularly the expression he wears while being shot by Karishma Kapoor towards the end. The anger, sadness, frustration, helplessness and the sense of ending are all conveyed by Hritik through the same cheek-shivering, nose-flaring expression, which is irritatingly repetitive. Hritik’s portrayal of anguish in ‘Fiza’ looked impressive due to the freshness of the expression, but over a decade thence the expression seems to be the only ‘intense expression’ in Hritik’s repertoire, which might be indicative of Hritik’s disappointingly sluggish growth as an ‘actor’; star, of course, he has always been since ‘Kaho Na Pyar Hai‘.

Hritik’s limitations as an actor come to the surface, boiling and frothing, despite the heavily watered down version of the original character he plays in the movie. The sense of rejection by the world (“Main goonda nahin hoon, nahin hoon main goonda.“), his deeply troubled relationship with his mother and Commissioner Gaitonde, who intensely disapprove of his ways, and the consequent emotional turmoil that make Vijay volcanic are completely missing in this new, adulterated version of Vijay, who is driven only by vengeance alone making the character a helluva lot easier to play.

Vijay Chauhan is far more complex than Hritik Roshan could have handled. The man is not ruled, run and defined just by the burning desire to avenge his father’s disgraced death or to get back Mandwa. Although central, the vengefulness is still just an aspect of the character. What defines Vijay is the fact that he is deeply and completely steeped in the acute sense of injustice. He sees the world as necessarily unjust, evil and driven by power alone. He not only resents his rejection at the hands of the world simply on the grounds that he got his power and influence through improper means, but also sees the rejection as another instance of continuing ‘injustice’ [the hotel sequence in Agneepath (1990)].

The hotel sequence does not have a parallel in Agneepath (2012), which is apparently to downplay a sharp streak and a simmering layer in the original character. This particular sequence brings out Vijay’s deep anguish at social rejection without betraying even the slightest hankering for acceptance. It’s rejection rejected, and paid back by rejection with equal disgust because Vijay wants ‘justice’, not just ‘acceptance’. Emoting such multiplicity of internal and external conflicts without compromising on the depiction of the suffocating unease from failing to verbally express the anguish was no mean feat for any actor. Hritik couldn’t have managed it. So, the complete layer was shaved off the character.

To Vijay Chauhan, the end justifies the means. And the principle of ‘right means’ makes one weak like his father. He considers his father noble, and also ‘right’, but certainly not ‘strong’, which, to him is a lot more important than being right or virtuous [the family dinner sequence in Agneepath(1990)]. He considers weakness a blot, a blemish that can only be washed away by power (“Kamjori ka maiel sachchai se nahin dhul sakta…wo dhulta hai taaqat se…”). Annoyed, he leaves the dinner table, storms out and goes away. He does not grab food to walk out and eat on the stairs breaking down and sobbing in the arms of his beloved like a sad little girl. Vijay is not someone who would whine a helpless ‘what could I?’. He roars a defiant ‘why should I!!!’.

Unlike the new muscled Vijay, he doesn’t look or ask for approval but maintains that he is no hooligan and states, dying, “Bura aadmi nahin hai main; goonda nahin hai main”, and thus forces his mother to finally make peace with her dead son – “Mera beta goonda nahin hai.” Vijay never asks a question that he does not himself answer instantly. He is as assured of his path as his father was of his own. He makes a choice and remains unapologetic about his ways and beliefs till the end. His version of the truth remains unaltered. He is at war with the world, but not with himself. He rejects the world the way it rejects him, and every bit as completely. But he sees the world’s rejection as necessarily unjust while his own rejection of the world as a just consequence of an unjust beginning.

The disgust, disdain, insult and avoidance that he suffers at the hands of the world hits home the hardest when Vijay walks out of Commissioner Gaitonde’s house after informing him of the possible attempt at Gaitonde’s life, and on being informed that the man was ‘Vijay Chauhan’, Gaitonde’s little son involuntarily blurts out – “Wo gunda?” The confused but acute look of sharp surprise mixed with a peculiarly sad anger that quickly surfaces and flits away speaks volumes about what Vijay goes through in that brief moment. This seething agony is an essential side of Vijay’s complex character. And in less able hands the character might have simply lost the essential rough edges of this highly layered character.

Any serious critic of Indian cinema wouldn’t fail to notice that Agneepath, 2012 does not have the hotel sequence. In the family dinner sequence, Vijay (Hritik Roshan) does not walk away, but sits on the stairs, eats and cries. In the original, Vijay (Bachchan) goes to his love interest and boils over at the injustice, and declares defiantly that he would never be Master Deenanath even if his mother does not let him eat her food (“Na de mujhe roti… utha de mukhe khane ke table per se, par main maaster Deenanath nahin banega, nahin banega main maaster Deenanath!”) The sequence of Vijay’s visit to Commissioner Gaitonde’s house to alert him is retained without the son’s calling him ‘goonda’. And there is a reason for these clever changes.

To gloss over Hritik’s serious limitations as an actor, the director chose to replace the internal emotional unrest with external physical conflicts because the latter are far easier to portray. An actor can easily wear a deadpan, dry expression to display coldness and cunning both. To add to the diversion, the director managed to rope in Sanjay Dutt to play a very different Kancha, and kudos to Dutt for pulling it off so remarkably well and shutting those up who would have otherwise jumped to argue the natural constraints of a remake by extending the utterly pointless argument of the copy never matching the original. Kancha of Agneepath, 2012 is a far more powerful character than his counterpart in the original despite Danny’s fabulous performance. To further offset a weak Vijay the director has Rishi Kapoor deftly playing Rauf Lala, an out-and-out negative character. With two heavyweight villains, played extraordinarily well by two very competent actors, Vijay looks naturally week and wobbly against the odds. So, the strategy is simple: if you don’t have a lion, bring in two dinosaurs, and the house kitten would do.

Agneepath, 1990 was massive a flop. People sat gawking at the screen. They had come to an Amitabh Bachchan movie, and there was no Amitabh Bachchan. There was this Vijay Chauhan who had the brotherly resemblance with the star, but no Amitabh! The fans and the critics trashed the movie without thinking twice. The movie was history the second day, but as the months went by the some of the more serious critics realized that it was indeed ‘history’ in quite another way. It was a monumental performance by an actor who, after 17 years of unchallenged reign, had simply taken off his superstardom like a raincoat and slipped into Vijay Chauhan like it was his night suit.

Having spent all his life fighting his way up in the dingy underbelly of Bombay, Vijay Chauhan is a coarse man with a hoarse voice, bad diction and major difficulties with constructing proper sentences. He doesn’t deliver sleek dialogues impressively. There is nothing ‘glamourous’ about Vijay.

But the 2012 version of Vijay has no such issues. His diction is perfect, speech slick and ways elegant. He never fumbles for the right word, doesn’t falter once. Even the famous ‘Vijay Deenanath Chauhan’ dialogue, well-supported by echo-effect, is delivered with such panache that he could have as well said “Bond, Vijay Bond”.

What’s more, he also seems to have a well-quipped, private gym stacked away in his chawl. In short, he is breathtakingly impressive. So, the young females go cooing, shrieking and whistling in joyous abandon. And that’s precisely because it’s not Vijay Chauhan on the screen; it’s Hritik Roshan. Ironically, the feminine ‘wows’ are the indubitable proof of Hritik’s failure at playing Vijay Chauhan.

The kind of popular critics who rubbished the original, oohed and aahed about the 2012 version, and Hritik’s ‘performance’. What consistency!