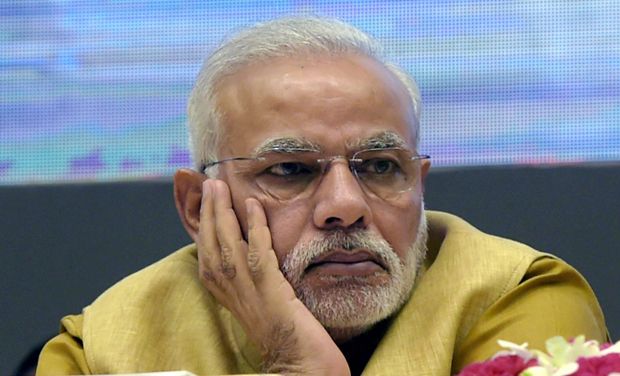 Modi’s ‘clean chit’ flag-hoisting followed by the pompous ‘fasting’ and the post-fast boasting was a three-stage tragi-comedy of no consequence and left me more disgusted than amused exposing my misgivings about my ability to go giggling even over the most ridiculously phony theatrics.

Mr. Modi, who had maintained a ‘studied’ – rather, ‘tactful’ – political silence, finally found a bit of his voice when he came across what his supporters thought of as a laundered, disinfected, polished and ironed ‘chit’ of some kind somewhere in the Supreme Court to be held up as a symbol of victory with the victory bugle blowing prematurely in the background.

His supporters and detractors both have unduly reacted to a simple, dispassionate Supreme Court order directing the trial court to proceed in the matter in accordance with the law. The apex court exercised restraint and did not touch the merits of the case in the interest of justice. Therefore, there is no question of its giving a ‘clean’, ‘soiled’ or semi-soiled chit to anybody.

The investigation and collection of evidence was undertaken by two independent entities — the Court-appointed SIT and the ‘amicus curie’ — and the findings are now to be placed before the trial court, which is now compelled to also consider the amicus’ report together with the report of the SIT. It is for the trial court to convict or acquit on the basis of the evidence placed before it. Any Supreme Court observation, howsoever fleeting or moderate, on the merits of the case could be prejudicial to the trial and would also be uncalled for, the proceedings not being a trial, which is why the apex court restrained. If the Court did not say “prosecute Modi”, it did not say “don’t” either. There is nothing more to it.

The question is not if Modi has been granted a ‘clean chit’, the question is whether such a ‘chit’ for Modi is possible at all. Are we supposed to believe that Indian state is incapable of protecting the innocents in the time of need? Like laymen, let’s ask the basic questions. Let’s leave Mr. Modi’s political calculations aside for a while for the sake of argument and also his thinly disguised emotions against the minority community.

That done, are we to believe that while Gujarat was burning, Mr. Modi was so far off in some political meditation within a soundproof Hindutva cocoon that he could not be reached even in the emergency of such kind? If it was beyond the power of the police and other forces to control the situation, why wasn’t the army promptly called in? And if the police and other armed forces at the disposal of the state were sufficiently equipped to deal with the situation, how did so many people turn up dead? It could only be either a criminally culpabale negligence on part of the state or a willful and purposeful abstention. Either way, it was the state that ‘allowed’ the genocide, no matter how one looks at it. It being so, can the Chief Minister be absolved? Even if Modi is not the murderous monster he is sometimes projected as, he did look like an extremely inefficient and ineffective CM guilty of criminal neglect, if not wilful malice.

But then, if the progress of Gujarat is anything to go by, Mr. Modi is not really ineffective or inefficient, and so far we have not been told that he was ill or otherwise rendered incapable of making sound decisions. So, what got into Mr. Modi when so many people were so systematically massacred? What made a man with a reputation of being ‘strong’ make such an obviously wrong decision of going soft on those who wantonly killed, raped and burnt? The ‘wrong decision’ could not be on account of such a rare bout of ‘Ministerial incapacity’ that was never glimpsed until or since. Modi’s projected innocence and his claim to fair-play makes no sense in face of the undeniable facts reported by multiple, independent agencies. The only version that talks of Modi’s ‘innocence’ is the ‘official version’.

From the national and international media to NHRC and Human Rights Watch, every single independent agency that looked into the pogrom found state complicity in the killings too glaring to be ignored even with closed eyes. So, the apparent lack of control of the all-controlling Gujarat CM was not a ‘failure’, but a daringly planned and systematically executed malfunction of the state machinery with political ends at its heart. That’s the only theory in which all pieces of the puzzle fit in perfectly. And all theories that seek to absolve Mr. Modi must necessarily reject all facts reported in national and international media, which, quite certainly would be an exercise in blanket denial of the undeniable truth.

However, the worst part was not the pogrom but the fact that Mr. Modi, despite being clearly ‘unclean’, managed to find electoral mandate to be the CM, and the Secular India tolerated the dirty dance of number politics. The idea of democratic accountability thus failed to clear the basic morality test. Humanity hung its head in shame while we watched then as we watch now, powerless.

Originally written to be published as part of my monthly column — STREET LAWYER — in LAWYERS UPDATE in October 2011 Issue. However, it was found too ‘hardhitting’ and harshly critical of Narendra Modi, and the Editorial at LAWYERS UPDATE thought it prudent to withhold the piece. Published on my WordPress Blog on December 4, 2011.

Freedom of Press: Is Regulation Encroachment?