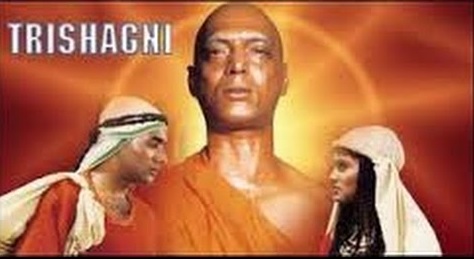 All religions attempt to marry spiritualism and ethics. One is not supposed to entertain harmful thoughts or harbour ill-will against others, for it hampers one’s own spiritual evolution and is the breeding ground for immoral conduct. Buddhism is no exception to this general approach that all religions subscribe to. However, the teachings have to be clearly understood in the right context. Even the staunchest of adherents sometimes fall for the temptations that have been most clearly and strongly warned against. And sometimes, one fails to see when one slips down the bottomless pit of immorality. Trishagni tells the story of Buddhist monks in a desert struggling to reconcile the realities of life with the teachings of Buddhism, which command one to lead a pristine life with compassion and mindfulness central to it.

A massive sandstorm hits the village, and wipes the entire populace out save two Buddhist monks, one of whom is the disciple of the other (Alok Nath). They find two children, a male child and a female, and take them into their care. Both the children are brought up by the monks in the Buddhist way of life. But when the youth sails in, the equation changes, and romance tugs at the heart of the girl (Pallavi Joshi), who falls in love with the boy (Nitish Bhardwaj). The disciple monk (Nana Patekar) finds romance opposed to Buddhist teachings and starts resisting the couple’s coming close. He teaches the boy to stay clear of such temptations that are sexual in nature, and tells him to keep away from women.

At the heart of the disciple monk’s attempt to keep the two apart is his own failing at keeping his own sexual turmoil in check after he inadvertently happens to see the girl bathing. The girl finds the disciple monk’s resistance unreasonable and rebels against it. The teacher monk is aware that there is something that the disciple monk is not admitting to despite being asked several times. The girl’s rebellion against the disciple monk results in the boy and the girl leaving monastery to walk across the desert in search of a suitable place. The boy is deeply perturbed by what he sees as a violation of the Buddhist teachings, and expresses his frustration and agonizing sense of guilt to the girl, who calms him down and tells him that Buddhism does not only approve of the institution of marriage but also regards it highly, and that part was glossed over by the disciple monk when he was teaching Buddhist thought to the boy because he was fighting his own demons. The boy is greatly relieved to hear that, and feels freed from the suffocating clutches of guilt.

On the other side, the disciple monk finally admits to his sinful thoughts and morally questionable deeds before the teacher monk, who is pleased to see that his disciple has finally owned up to his guilt. And it’s time for another sandstorm, which hits mighty hard levelling everything this time. The unforgiving and unflinching Law of Karma settles everything with a single stroke of apparently punitive destruction.

At this point several questions surge forth. The foremost among them relates to the sin of the disciple monk. The Law of Karma decrees annihilation on the temple and the monks. And the Law of Karma is primarily a moral law in the context of the movie. What was the sin committed? The answer to the question is a little more complicated than it appears at the first instance. What’s even more interesting is how easily we have already concluded sub-consciously as to what the sin was. The image of the disciple monk seeing the bathing girl impacts so deeply that we automatically conclude that it was the gravest of the sins. There can certainly be other interpretations.

The disciple monk sees the girl bathing by accident and not by design. He does not try or want to watch again even though he does find it difficult to dispel the image of the bathing girl despite fighting it hard, which frustrates him a great deal. It’s just a human frailty that emerges in him when he has difficulties fighting. But what’s sinful in any of it? He is resisting as much as he can, and failing. Failure to fight a force as immensely powerful as basic human instinct is no sin even by the loftiest of standards.

Therefore, what appears to be a sin so clearly might not be a sin; only a failure to fight one’s instincts. But there is another way of looking at the same thing. These are the monks who have spent their lives practicing Buddhism through intensive meditation aimed at gaining control of their senses. Is their failure to keep their instincts in check not criminal enough to warrant a Karmic backlash? Then again, is the unbearable agony that the disciple monk writhes under all through not a fitting Karmic consequence of this failure in itself? The sandstorm hits the temple just when the disciple monk admits to his failing. Does it mean that Law of Karma makes no allowances for confessions? If that is so, why does the teacher monk want his pupils to own up to their sins when such admissions make no difference?

The Doctrine of Karma in Buddhism operates by enforcing an unforgiving law of cause and effect, which is free of all divine interferences. So, the confession is not directed to a God who might forgive one’s failings, but is directed to oneself so that one could take measures to correct the course in time to reverse or tone down the ill-effects of one’s bad deeds.

The disciple monk’s sin is not just his failing to rein in his senses; his sin lies in his denial of his failing, and in his not humbly trying to reflect upon it to regain control and set himself back on the right path. Instead of self-correction, he indulges in using harsh measures against the girl by prohibiting her from going near the boy. And he does it with a good deal of violent speech, which is not in keeping with the Buddhist idea of non-violence. He teaches his disciple—the boy–to stay away from women, and warns him against going close to the girl. He is angry and also a bit jealous in keeping the girl and the boy apart. He is not governed by any good intentions. Not even by a mistaken notion of moral or spiritual rightness, and he is fully aware of it, too, and yet he persists with it until the very end. This is the unpardonable sin that the Law of Karma strikes against.

The teacher monk and the Buddhist temple are also buried by the sandstorm together with the disciple monk. One might ask as to what was their fault. The teacher monk, who was the head of the institution, failed to check the sin despite knowing of it. He failed to stand for the boy and the girl when they were subjected to ill-treatment by the disciple monk, particularly the girl. He also failed to teach the boy that the institution of marriage was not against Buddhist teachings. It was the duty of the teacher monk to ensure that the Buddhist traditions were passed on to all his pupils uncorrupted.

The temple bears the brunt because it became the place where the evil had reared its head, and with the boy and the girl already gone, there was no good purpose that the temple could serve. So, in the destruction of temple and the end of both the teacher and the disciple, there is a release from the miseries of the world and a closure.

‘ Trishagni’ is about the struggle of a Buddhist monk against natural temptations, and the consequent frustrations that assail him repeatedly. The path of abstinence is not easy. What is worse is one’s failing to realize one’s mistake, and what is even worse is one’s taking out one’s frustration on others. The Karmic Laws simply stand aside and let one’s deeds determine whether and how much one suffers. Buddhism is indeed about renunciation, but it does not force renunciation or look down upon those who do not renounce the world.

The movie is not all that difficult to understand, but one must watch out for mistaken conclusions, which are so easy to arrive at the moment one applies conventional moral principles without due care.