Lamhaa: No ‘story’ and nothing ‘untold’ 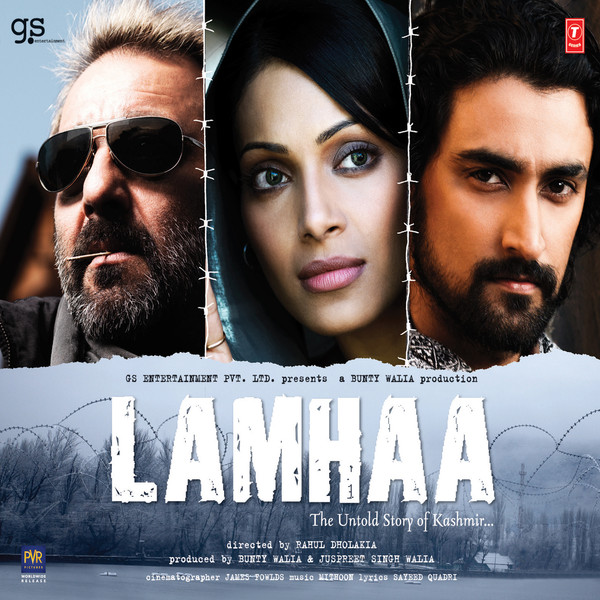 Training camera on Kashmir’s truth is no child’s play because there are simply too many versions of too many truths involved in the composite reality of the blood-soaked heaven-on-earth. Likewise, understanding the politics of Kashmir is quite a daunting task because there are just too many players with varied interests grinding their respective axes.

Lamhaa promises to tell the ‘untold story of Kashmir’ and ends up dishing out the same old story of political opportunism and lust for power, which is now the main course in all celluloid meals cooked in third rate political oil for popular consumption. However, Director Dholakia failed to fry it well enough leaving it insufficiently crisp for popular taste, and spiced it up a little too much for critical palate. Therefore, the melodramatic attempt at realism that we recently witnessed in Raajneeti fails in Lamhaa as well. The only difference being that Raajneeti might still be liked by the less informed and more impressionable, but Lamhaa leaves the less informed confused and the better informed irritated.

Through a rolling script the movie introduces the past of Kashmir beginning from where its modern day trouble began – the Indo-Pak partition and Kashmir’s accession to India – down to the present day conflict, which revolves around the sense of identity of the Kashmiri people and the ‘Kashmiriyat’. These two elements have always been used by the politically influential people to further their own interests at the cost of the ordinary people. But then, that’s not an issue particular to Kashmir. Wherever there is a conflict involving the political identity of a people, the cultural and religious identities are used as easy cards in the all-out game of political horse-trading.

The movie begins with Military Intelligence suspecting a plot to destabilize Kashmir in pursuance of a separatist agenda. The head of the operation feels that it is not a run-of-the-mill intelligence project, and cannot be handled by any person other than Vikram. Vikram is thus introduced in a manner reminiscent of John Rambo minus the background. We have no idea who Vikram is, and what has he done in the past to deserve that kind of faith. The result is that we have Sanjay Dutt strutting around in his characteristic way without a trace of Vikram visible on his persona. Dholakia seems to have overlooked the fact that credible characterization is an indispensable aspect of sensible moviemaking.

Vikram takes the identity of Gul Jehangir in Kashmir, and preposterously enough wherever he changes his getup to become a journalist for specific purposes, he introduces himself by some other name. And he does this after having interacted with Aziza (Bipasha), who happens to be related to a prominent separatist leader, Haji (Anupam Kher). It is difficult to understand why a spy on such an important mission would want to be this visible with two different identities when he is very likely to be observed by those against whom he is supposed to collect information. The director seems to have gone in to James Bond mode and switched the reality off despite having promised to tell the untold truth. Spies are discreet cats; not roaring tigers. But Sanjay Dutt, with the getup he was made to sport, looks all too conspicuous in the setting. Realism is a casualty yet again.

It is not for no reason that Kashmir is considered one of the most dangerous places in the world. The complexity of Kashmir’s politics stems from the issue of Kashmiriyat and all that it stands for. With equally complex Hindu-Muslim equation thrown in together with the existence of an Islamic nation next door, Kashmir is a curious political curry that confuses and astounds the political taste buds of the most deft practitioners and keenest observers of politics. And that’s because there are just too many subtle influences that go a long way in altering the political hues of Kashmir. This is also the reason why a long shot view of Kashmir can only leave the observer confused whereas zooming into certain areas and presenting a collage of pictures would look patchy or disjointed. The complete political reality of Kashmir can only be seen through the personal viewpoints of the Kashmiris. In other words, there is nothing like the ‘whole story’ of Kashmir because there is a many intertwining stories that go into the making of the story of Kashmir and though a garment can be understood in terms of threads but such understanding cannot be gained by thoughtless unweaving. Each thread has to be understood in the context of its location in the garment and the way it has taken shape.

In conflict regions like Kashmir with violence constantly drumming like persistent monsoon rains, distrust is the order of the day, which blurs the political vision of the people leaving them confused and desperate. In such a scenario the causes and the justifications are completely lost turning the goings-on into a splash of events flying around in a mad political storm with no discernable pattern to it.

In such a situation law enforcement authorities are left with no option but to try and bring normalcy back, which cannot be done without crushing violence and the only way to crush violence is to use superior force, which fuels discontent and keeps the political brew simmering and boiling.

Lamhaa has no grip on the peculiarities of Kashmir conflict, which is the reason why it is has the air of an irritatingly generalized and highly Bollywoodish telling of a political story that could have taken place anywhere at any point of time.