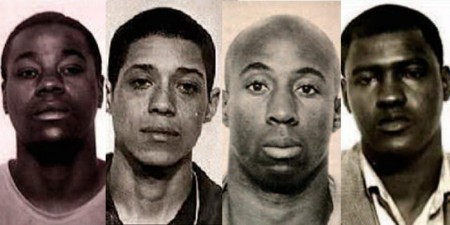 He had been viciously mutilated with a machete. His peeled skin was hanging down in bloody strips from his skull. He was staggering and muttering incoherently. One could easily mistake him for a drunkard, and when the professor, who happened to be driving with his wife through the industrial part of San Francisco on the night of October 19, 1973, got out of his car and called out to him, he perhaps expected a response befitting a drunk man. But he was in for a shock.

The mutilated man was Richard Hague (30), and had stepped out of his house for a post-dinner stroll with his wife, Quita (28), when the two were forced into a white van and driven away from near their house on Telegraph Hill. Quita was molested by two men before being nearly decapitated by the third one with a machete. Richard was also attacked with the same weapon and was left to die. Fortunately, he survived. This was the beginning of what is now known as ‘Zebra Murders’ after the San Francisco Police Department assigned the “Z” radio frequency to all communications related to the killings in the series of hate-driven murders that began on the night of October 19, 1973 with Quita as its first victim.

Quita had actually managed to escape unhurt, when, one of the two black men grabbed Richard; she took to her heels but stopped when one of them drew his gun, pointed at Richard’s chest and threatened to shoot. Richard requested her to cooperate instead of asking her to run away, which turned out to be the worst mistake of the couple. Had she run away, the killers might have been deterred by the prospect of being recognized by Quita and also by the fact that Quita, having gotten away, was certainly going to report the crime immediately. Fearing early police action they could have let go of Richard, but once Quita was back, they had nothing to fear.

The second attack of the series occurred 10 days later, on October 29, 1973. Frances Rose (28) was at the entrance of the University of California at Berkley in her gold Mustang when a black man stood in front of her car with his hand raised asking her to stop the car. Rose slowed the car down. He leaned in and asked for a ride, but something wasn’t quite right. Rose stepped on the accelerator, but that was not good enough. The man managed to open the door on the passenger side and fired into the car hitting Rose in the neck, cheek and chest. She was dead.

On November 9, 1973, Robert Stoeckmann came close to the same fate, but luck stood by his side at the last moment. Stoeckmann, a 26-year-old Pacific Gas & Electric clerk, was at the company stockyard on Army Street at around 8:00 p.m. when a black man approached him asking for directions, which Robert politely provided. But when Robert stepped out of the yard after finishing his work there, he was surprised to see the man waiting for him.

The man pushed Robert behind the fence, drew his gun and pointed it at his face. The man did not look anxious in the least. He was about to shoot a man just as simply as he would tighten a loose screw. He looked around and pulled the trigger, but Roberts moved away at the last moment and the bullet grazed his neck. He broke free but could not run away and stumbled a couple of feet and dropped face down.

The man came close and stuck the gun in his stomach. Robert reacted with an instinctive, self-preserving move of holding the gun and trying to move it away from his body. The man tried to shoot, but, to his misfortune, it was a revolver and Robert had his hands wrapped in a firm grip around the cylinders of the gun preventing the cylinders from rolling, which, in turn, prevented the gun from firing. Robert pushed away the gun hard and managed to fling it away. The two men raced for the gun. Roberts got to it first, and turned around to point the gun at the attacker. When the attacker kept moving forward, Robert pulled the trigger. Nothing happened. He pulled it again. The same result. But he pulled it again and again and yet again. The gun came alive.

The attacker, a 35-year-old former conman named Leroy Doctor, was later found hiding under a railroad trestle by the police. He had been shot in the shoulder, arm and stomach.

On November 25, 1973, Saleem Erakat (53) — a Jordanian Arab known as “Sammy” to his customers at Erakat’s Grocery of 13-year standing at 452 Larkin Street — was greeted by a regular customer with “ As-salaam-alaikum ” (“Peace be with you”). “ Walaikem as-salaam ,” (“Peace be with you, too”), Saleem said in response. The man drew a gun from his attache case and took Saleem to the back of the shop. Saleem asked the man to take away all the money he had in bag there, but the man did not display any interest and went on wrapping a thick cloth around the muzzle of the gun, after which he placed the muzzle behind Saleem’s right ear and pulled the trigger ending the life and dreams of a grocer with a wife and four children between 13 and 21 years of age.

Paul Dancik (26), a heroin addict, was just as unlucky on December 11, 1973, when he was released from prison after serving a term for drug possession and desperately wanted to have a dose of heroin. He went to a pay phone on Haight Street with a coin in one hand and a small paper with the drug dealer’s phone number in the other, but before he could dial the number a black man called out from behind. Paul Dancik turned around only to receive three bullets in his chest without a word. Clutching his chest, Paul staggered some 20 feet down the sidewalk before coming down on the pavement with a dead thud. December 11, 1973 was Paul’s last day alive.

On December 13, 1973, Arthur Agnos (35), the would-be mayor of San Francisco, was at Potrero Hill to attend a meeting, after which he happened to stop on the sidewalk talking to two women when a black man approached from behind and shot him twice in the back sending bullets through his lungs, spleen and kidneys. The shooter ran away. Agnos was quickly taken to a house across and an ambulance was promptly called. Agnos survived and, defiant, returned to the same neighbourhood a month later to attend another meeting. This time he was escorted by four police officers and four large black men. No untoward event took place this time. Recalling the assailant Agnos told that he had not seen the man before and he did not display any emotions when Agnos turned towards him after being shot. He looked as though he was in “some kind of a state,” Agnos told.

On December 13, 1973 itself, Marietta DiGirolamo (31) was also attacked when she went out looking for her boyfriend around 9:00 p.m. at Divisadero, a popular place with bars and boutiques, after having waited for him in her apartment for long. She was walking up the street when a black man pushed her into the doorway of a barbershop, pulled out a gun and shot her twice in her chest and once again in the back before leaving. She died on the sidewalk with strangers trying to figure out what happened.

On the night of December 20, 1973, Angela Roselli (20), a college student, had just come home from a Christmas party and had parked her car close to her apartment in The Haight. She had had a few drinks with her friends and was happily looking forward to a welcome break from gruelling studies. She noticed a car parked with two black men sitting inside, talking. One of them got out of the car and started walking towards her. He was a well-dressed black man, but his approach was quite menacing. Angela later described the look on the man’s face as “a zombie look” as though he was “in a trance”. Angela could not see him take the gun out. Perhaps he was carrying it up his sleeves. He shot her thrice but the fourth shot missed Angela. The third shot had grazed her spine, and she had to spend weeks recovering from her injuries. But she did manage to survive the attack, unlike Ilario Bertuccio (80), who was shot the same night as he was walking down to his apartment from the bottling company at Bay View district of San Francisco, where he worked. He was shot at close range by a stranger four times in the chest and shoulder, and died instantly on the sidewalk.

On December 22, 1973, Neal Moynihan (19), an Irish-American living in San Francisco, was walking down the street at around 8:00 p.m. near the Civic Center carrying a package containing a teddy bear for his little sister when a black man walked up to him and shot him in the neck, heart and face. He slumped on the sidewalk, dead.

The attacker ran into an alley and turned into Stevenson Alley near Gough, where he ran into Mildred Hosler (50), who was walking to a nearby bus stop. He went to her and pumped four bullets into her left breast before jogging further down the street. Some writers also believe that it was not the same man who killed Moynihan and Hosler but it was two different killers at work. However, the debate is put to rest by the fact that according to the evidence led during the trial, Hosler was killed only a few minutes after Moynihan was shot, and in the opinion of the firearms identification expert, as per the court records, “the bullets that killed Moynihan and Hosler were fired from the same gun used in the shooting of Erakat, Dancik, Agnos, DiGirolamo, Bertuccio, and DeMartini”. So, it is nearly impossible that the two were killed by two different killers.

The killings not only baffled the police, but also caused a great furour because the murders were apparently without any motive whatsoever. The victims were not robbed or raped or threatened. They were completely random killings that made no sense. What was further disturbing was the fact that the killers were black and the victims white. There were a few other commonalities like the killer had, in all cases, walked up to the victim, shot the victim several times with a .32 caliber pistol at close range and fled on foot. The police assigned “Z” radio frequency for all communications related to the killings and the press started referring to them as “Zebra Killings” or “Zebra Murders”.

Originally written for and published in LAWYERS UPDATE  as a two-part ‘Crime File’ in March 2015.