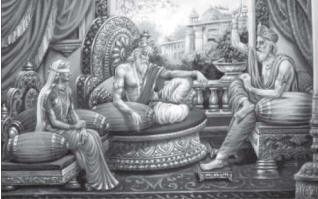 Vidur’s interaction with Dhritrashtra appears to be a generalized discourse on human virtues. It would be a serious error if one were to consider Vidur, the Prime Minister of Hastinapur, naïve enough to indulge in high sounding talk that is of no use or relevance to a king. Vidur’s exposition of the principles of good policy and virtues is very much in the context of the circumstances that existed then and it is also essentially directed at the king addressed. Therefore, the qualities recounted are those that Vidur would not have his king without. Vidur wants his king to be wise and says, “He that is not served from the high ends of life by the aid of self-knowledge, exertion, forbearance and steadiness in virtue, is called wise. These again are the marks of a wise man, viz.,adherence to acts, worthy of praise and rejection of what is blamable, faith and reverence. He whom neither anger nor joy, nor pride, nor false modesty, nor stupefaction, nor vanity, can draw away from the high ends of life, is considered as wise. He whose intended acts, and proposed counsels remain concealed from foes, and whose acts become known only after they have been done, is considered wise.”

For a king both anger and joy are wrong reasons to do anything that has a bearing on the running of the State or the lives or welfare of his people. Similarly, vanity is another vice that can lead to destruction of kingdoms. The king must always keep the general welfare above everything. His personal interests and inclinations must not play any role in the performance of his sovereign functions. Nothing should deter him for ‘the high ends of life’. It must be noted that ‘high ends of life’ for a king are necessarily different from those for a commoner. However, Vidur does not clearly explain the expression here, leaving it open to interpretation so as to preserve its flexibililty.

The advice received and the intention must always remain under wraps to the outsiders until the advice is acted upon and intention pursued. Vidur advocates secrecy and confidentiality in matters that are of far reaching consequences. Therefore, the king must not indulge in idle talk and must make concrete decisions in consultation with the experts in the area and then act. At no point before the king starts acting should his intentions be clear to anyone. Vidur, therefore, counsels for protecting State secret at all costs.

Vidur warns the king against wrong advices. Vidur’s king must be wise enough to make out loyal advisors from those who have vested interests in State affairs or those who value their personal ambitions highly. He is of the opinion, “Poison slayeth but one person, and a weapon also but one; wicked counsels, however, destroy an entire kingdom with king and subject.”

Vidur is all praises for the virtue of forgiveness. He says:

In the same vein, Vidur adds, “These two, O king, live (as it were) in a region higher than heaven itself, viz., a man of power endued with forgiveness, and poor man that is charitable.”

However, forgiveness operates differently for a king than for a commoner. While the commoner can enjoy the sweet fruits of forgiveness without bothering much about the nature of it, the king has to make a distinction between what he can rightfully forgive and what he cannot. This is because a king’s forgiveness can easily do injustice to someone. A king cannot and must not allow any such person to go unpunished who has done harm to someone in violation of the law. The king does not have the right to forgive a violation of the law that has already resulted in some injury to someone because forgiving in such cases would invariably be seen as injustice to the victim.

King can forgive only such acts that have done no harm to any member of public. In other words, king can forgive as a person, but cannot condone the violation of law as king because a judge does not have any authority to pardon unless expressly provided by the law. Vidur says:

That king who renounceth lust and anger, who bestoweth wealth upon proper recipients, and is discriminating, learned, and active, is regarded as an authority of all men. Great prosperity attends upon that king who knoweth how to inspire confidence in others, who inflicteth punishment on those whose guilt hath been proved, who is acquainted with the proper measure of punishment, and who knoweth when mercy is to be shown.

Lust and anger have to be forsaken by the ruler because these are uncontrollable urges and can spur a human being to do things that he would not even think of in his right mind. If the king acts out of lust or anger, he is capable of doing immense damage to his people thereby eroding popular support, which, in turn, could lead to the downfall of the empire.

Gift must be endowed and punishments inflicted only upon the deserving. The passage quoted above makes it clear that Vidur does not support forgiveness in cases where the guilt has been proved. However, he does insist upon ‘the proper measure of punishment’. Thus, the punishment must be adequate but not disproportionately harsh compared to the crime committed. Besides, there can also be cases where the offender deserves mercy on account of the circumstances in which he committed the offence. Therefore, Vidur is against unusual and cruel punishments and is all for mercy where deserved.

Sense of proportion is a critical attribute of a ruler, and those kings who do not have this virtue do not prosper. Vidur warns, “The king who knoweth not proportion or measure as regards territory, gain, loss, treasury, population, and punishment, cannot retain his kingdom long.”

Therefore, from territory to population and punishment, everything should neither be in excess, nor inadequate. For instance, a large territory is ordinarily considered to be indicative of a powerful kingdom. But if the territory is too large to be managed effectively, it is almost certain that it will fall into the hands of someone else. Similarly, if the territory is too small, it wouldn’t be able to provide resources for the maintenance of internal order and for warding off external aggression. Therefore, sense of proportion on part of the king is critical for the very existence of a kingdom .

Originally published as part of Thinkers and Theory series in Lawyers Update in July 2013.

The Outlines of Vidur Niti