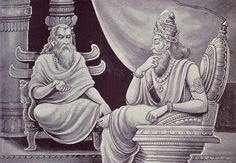 In the political scheme of Vidur, the king is central, which is why he is insistent on the king’s inculcating all those characteristics that are required for him to be a powerful and widely respected monarch. Vidur is alive to the fact that it is through the regard of the masses that the king gains the moral ground from which all political legitimacy flows. However, in the circumstances he was speaking, the greatest challenge before him was to make Dhritrashtra understand the significance of just conduct and the undeniable importance of keeping the clan united. Vidur says:

They that are no longer in peace with their relatives, obtain no sleep even if they have recourse to well-made beds; nor do they, O king, derive any pleasure from women, or the laudatory hymns of bards and eulogists. Such persons can never practice virtue. Happiness can never be theirs, in this world. Honours can never be theirs, and peace hath no charm for them. Counsels that are for their benefit please them not. They never acquire what they have not, nor succeed in retaining what they have, O king, there is no other end for such men save destruction. As milk is possible in kine, asceticism in Brahmanas, and inconstancy in women, so fear is possible from relatives. Numerous thin threads of equal length, collected together, are competent to bear, from the strength of numbers, the constant rolling of the shuttle-cock over them. The case is even so with relatives that are good, O bull of the Bharata race, separated from one another, burning brans produce only smoke; but brought together they blaze forth into a powerful flame. The case is even so, O Dhritarashtra, with relatives. They, O Dhritarashtra, who tyrannise over Brahmanas, women, relatives, and kine, soon fall off their stalks, like fruits that are ripe.

Vidur seems to be stressing the need to keep the natural bond of blood strong because all other bonds need to be built but the bond of blood simply needs to be preserved and protected. All political associations born out of the alignment of interests are temporary and may undergo drastic change under changing circumstances, but blood relations tend to prove stronger, as they do not arise out of political or materialistic interests.

One of the most prominent causes of discord within families and other associations of the equals is anger. Vidur, therefore, advices the king to keep rage under control because it is one of the root causes of self-destruction. He says:

O King, anger is a kind of bitter, pungent, acrid, and hot drink, painful in its consequences: it is a kind of headache not born of any physical illness and they that are unwise can never digest it. Do thou, O King, swallow it up and obtain peace.

Dispelling the myth that strength is about being tough, Vidur says:

That is not strength which is opposed to softness. On the other hand, strength mixed with softness constitutes true policy which should ever be pursued. That prosperity which is dependent on crookedness alone is destined to be destroyed. That prosperity, however, which depends on both strength and softness, descends to sons and grandsons intact.

Clearly, acting tough alone would send down the signals of tyranny in the masses, and a tyrannical ruler is feared but never liked. Therefore, while the ruler cannot be soft because he cannot risk being seen as timid and pliant, he can neither allow himself to be seen as a tyrant. Thus, a mix of tough measures and kind gestures are required for the people to like and praise the king and also fear his wrath. Interestingly, the same policy was advocated by Kautilya later, and then by Machiavelli further down in time.

In connection with the nature of strength Vidur says to Dhritrashtra:

Listen to me, O king. Men are said to have five different kinds of strength, of these, the strength of arms is regarded to be of the most inferior kind. Blessed be thou, the acquisition of good counsellors is regarded as the second kind of strength. The wise have said that the acquisition of wealth is the third kind of strength. The strength of birth, O king, which one naturally acquireth from one’s sires and grandsires, is regarded as the fourth kind of strength. That, however, O Bharata, by which all these are won, and which is the foremost of all kinds of strength, is called the strength of the intellect. Having provoked the hostility of a person who is capable of inflicting great injury on a fellow creature, one should not gather assurance from the thought that one liveth at a distance from the other… There are neither physicians nor medicines for one that hath struck by the arrow of wisdom.

Vidur warns in no uncertain terms that it is not wise for the king to anger a man of wisdom because wisdom is a weapon that can strike long-distance without fail. It is pertinent to note that it was because the king answered a wise Brahmin by the name Chanakya that the downfall of a mighty empire and the installation of a new regime occurred hundreds of years after Vidur had forewarned the kings against inviting the wrath of the wise. Vidur, therefore,was demonstrably right.

Advising the king to ensure that his plans and the advice that he obtains from his advisers are kept secret, Vidur says:

He that is wise should ever keep in view the (following) six conduits by which counsels become divulged, and he that desireth success and a long dynasty should ever guard himself from those six. They are, intoxication, sleep, inattention to spies, set over one by another, one’s own demeanour as dependant on the working of one’s own heart, confidence reposed on a wicked counsellor, and unskillful envoys. Knowing these six doors (through which counsels are divulged), he that keepeth them shut while pursuing the attainment of virtue, profit, and desire, succeedth in standing over the heads of his foes.

Vidur further advices the king not to trust “a woman, a swindler, an idle person, a coward, one that is fierce, one that boasts of his own power, a thief, an ungrateful person, and an atheist.”

Vidur seems to be of the opinion that the strength of the monarch lies in his character, wisdom and dignified conduct. Vidur’s king is, therefore, different from Machiavellian prince in that the Machiavellian prince may or may not have the required qualities but must appear to possess while both Vidur and Chanakya would prefer to appoint only such person as king who actually possesses these qualities.

Originally published as part of Thinkers and Theory series in Lawyers Update in August 2013.