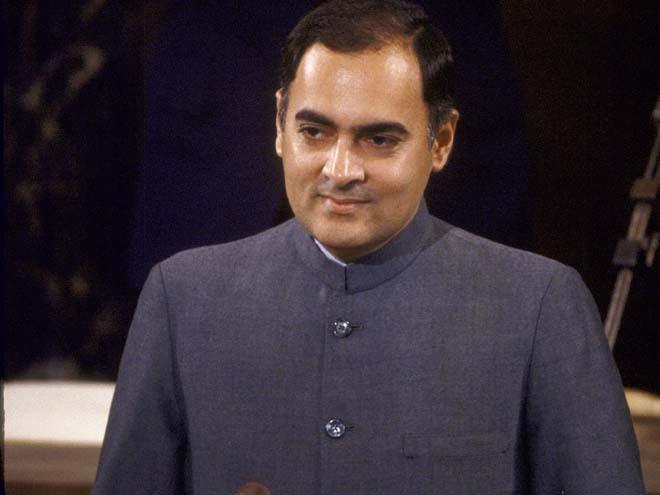 Rajiv Gandhi, born on August 20, 1944 in Mumbai, became India’s sixth Prime Minister after the assassination of his mother, Indira Gandhi, on October 31, 1984. However, Rajiv, depite being the elder son of India’s then Prime Minister, had no interest in politics and did not want to become an active politician. It was his younger brother, Sanjay Gandhi, who was actively involved in Indian politics of that time. He went to Cambridge University, but did not finish his degree and dropped out of the course. He met Antonia Edvige Albina Maino in the city of Cambridge and later married her. After their marriage she became Sonia Gandhi. After dropping out of the course at Cambridge, Rajiv Gandhi joined Indian Airlines as a professional pilot, and did not turn to politics as people might have surmised then. It was only when his brother, Sanjay Gandhi, died in a plane crash that Rajiv entered politics primarily to lend a helping hand to his mother. However, her assassination in 1984 brought Rajiv at the helm of Indian politics with Indian National Congress coming to power with the largest majority ever, having won 411 of 542 seats.

The most shattering blow to Rajiv Gandhi’s Prime Ministership was dealt by the infamous Bofors Scandal that mired his clean image and eventually led to the defeat of his party in the 1989 elections. The other two major controversies that had long-term effect on the national and international politics were the Shah Bano case issue and Rajiv’s sending of the Indian Peace Keeping Forces (IPKF) to Sri Lanka to fight against Liberation Tigers of Tamil Elam (LTTE). Pressing IPKF into service against LTTE drew the displeasure of the Sri Lankan militant group, which carried out Rajiv Gandhi’s assassination in 1991, and the assassination, in turn, led to the eventual drying up of all sympathies for the group leading to its complete annihilation later in the day.

The Bofors Scandal came to the fore after Rajiv Gandhi’s own Finance Minister, V. P. Singh, found and brought to the notice of the people the details pertaining to political corruption that touched the highest public office in the government – that of the Prime Minister himself. It was found that tens of millions of dollars had changed hands as bribe by the Swedish Bofors arms company in exchange for defence contracts. The close associate of the Gandhi family, an Italian businessman by the name Ottavio Quattrocchi, was the alleged mediator in the deal. V.P. Singh had to face the music for making the damaging details public, and he was first dismissed from the office he held and then from the membership of the Congress. An investigation carried out by investigative journalists, Chitra Subramaniam and N. Ram for The Hindu , connected Prime Minister Rajiv Gandhi directly to the Bofors Scandal.

The Bofors case was still under investigation when Rajiv Gandhi was assassinated on May 21, 1991 by the LTTE. After a long-drawn legal battle, some six years later, the Swiss banks released some 500 documents in 1997. Armed with the incriminating documents, the Central Bureau of Investigation (CBI) initiated cases against Quattrocchi, Win Chadha, Rajiv Gandhi, the Defence Secretary S. K. Bhatnagar and a number of other people involved. However, not much came out of it eventually. Win Chaddha died. Quattrochi could not be extradited though a red corner notice issued by the Interpol still stands against him.

On February 5, 2004, the Delhi High Court found no merit in the bribery charges against Rajiv Gandhi. Consequently, the charges were quashed. However, other charges, like cheating, still stand. On May 31, 2005, relief came to the British business brothers, Shrichand, Gopichand and Prakash Hinduja, when the High Court of Delhi quashed the allegation against them in the Bofors case. However, some of the charges remained.

However, the scandal improved V.P. Singh’s image in the public eyes and he was seen as an honest whistleblower, who exposed corruption in the government. His appeal with the people made the parties in the opposition unite under him and they together formed the Janata Dal coalition. 1989 elections resulted in the ouster of the Congress and allowed the Janta Dal to come into power with the support of the communists and the Bharatiya Janata Party. V.P. Singh and Janata Dal formed the government with Rajiv Gandhi as the Leader of the Opposition.

Apparently, Chandrashekhar, a prominent leader within Janta Dal, had his difference of opinion with V.P. Singh like many others within the coalition and was promised support by Congress, which led to the collapse of V. P. Singh government in October 1990. Chandrashekhar later became the Prime Minister of India with outside support from the Congress, which was later withdrawn necessitating fresh elections.

The Shah Bano case was another issue that shook Rajiv Gandhi government deeply. Shah Bano, a Muslim woman of 62 with five children, was divorced by her husband, who denied all maintenance after the period of ‘ iddat ‘, a course of action consistent with Muslim Personal Law. However, she was allowed maintenance under section 125 of the Cr.P.C., and the issue came before the Supreme Court with the Apex Court ruling in favour of the woman. It held that since section 125 was a secular provision, it applied to everyone including the Muslim community. Muslim Fundamentalists saw it as an attack on their Personal Laws and protested hard. The Rajiv Gandhi government enacted The Women (Protection of Rights on Divorce) Act, 1986 to nullify the impact of the Supreme Court judgment in the Shah Bano case . Later, when the constitutionality of the Act came under in the Daniel Latifi case, the Supreme Court held it constitutional and interpreted the expression “within the iddat period” used under section 3(1)(a) of the Act to hold the meaning akin to “within but not limited to”, and thus stretched the time period for maintenance to the entire life of the divorced wife so long as she does not re-marry.

Rajiv Gandhi remained an unwilling politician and Prime Minister, who couldn’t really do as well as the country expected him to, despite having tried. That wasn’t entirely his fault though.

Originally written for and published in LAWYERS UPDATE  as a part of ‘THE LAW AND THE CELEBRITIES‘ series in June 2012.