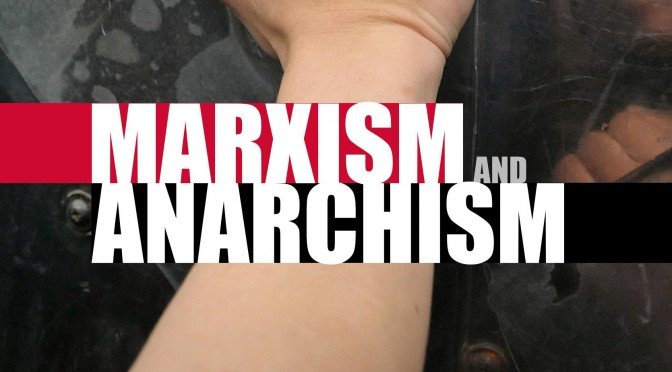 Abolition of the State is the central theme in both Anarchism and Marxism. State is considered evil and the source of exploitation. In the opinion of the Marxists it is the instrument of class rule installed and run by the dominant class to further its own interests and aspirations. Marxists see the society divided into the worker class and capitalist class. The concentration of the wealth produced by many in a few hands is what they oppose. The class division is their principal enemy and through a proletarian revolution they seek to abolish it. And since the utility of the State lies in the oppression of one class by the other, it loses its relevance once class division is no more. And on account of the ensuing redundancy the State would wither away.

Anarchists, on the other hand, feel that State is the highest and mightiest hierarchal order and is the embodiment of the greatest possible coercive force within a territory. Brute force and coercion goes into the very foundation of the State, which is why abolition of the State is desirable and necessary for there to be a society based on voluntary cooperation and free of oppression of man by man. Anarchists are against authority of any kind because authority necessarily implies Marxism, Anarchism and State coercion of one kind or the other. Since they are against authority, it naturally follows that they want all hierarchies abolished because authority works through hierarchies. The very objective of the anarchists is the undoing of hierarchies so that the evil of coercion could be wiped off. However, the Marxist aspiration is the abolition of class division and class rule. And in Marxist scheme, this State is not ‘abolished’ but it simply ‘withers away’ because it loses its relevance.

Both Anarchists and Marxists abhor class dominance but their classes are different. In Marxists’ view the society is divided into capitalist class and worker class whereas Anarchist see it divided between those with authority and those without. In other words, Anarchists see it divided between those who issue orders and those who follow the orders. The distinction is clearer in Marxist conception because the worker is anyone who is working for a salary or who is selling his labour and skill for money, and the capitalist is the one who controls the production and pays the workers. However, the division is not so distinct in case of the Anarchist conception because the one who issues orders to some, in most cases, is also taking his orders from someone else. Therefore, it is possible for one person to be both the issuer and implementer of orders and directions. Therefore, anarchists are not actually against a bunch of a kind of people huddled together on account of common interests, which makes their class distinction relatively abstract as compared to the Marxist class distinction.

Marxist believe that the increasing gulf between the living condition of the capitalists and the worker class would be so wide that there would be a proletarian uprising and the means of production would then come under the control of the worker class and from there on would no longer be privately owned. So, control of the means of production is central to Marxist philosophy. To anarchists private ownership of property is a part of the hierarchal order and must be abolished for that reason. Their primary concern is not the control of the property and means of production – though they do not overlook the significance of it – but the abandonment of all coercive methods and all such arrangements that are founded on the threat of force.

In Marxist scheme of things the State withers away with the classless society coming into being. The means of production are still to be controlled and coordinated and the group that takes up administrative functions is bound to eventually develop into a class distinct from the worker class and the danger of the classlessness of the Marxist classless society is thus very real. And if there is more than one class there would certainly be clash of interests at some level and the likelihood of State’s re-entering the scene is high enough to be almost certain. This is the reason why Marxists, instead of thinking of doing away with the State completely, think of transforming the State to suit their goals and aspirations. The problem, however, is that so long as the State remains in any form, there would be at least two classes, which runs counter to the Marxist aspiration of a classless society.

So far as Anarchists are concerned, they would begin by abolishing the State. They believe in voluntary cooperation in working towards common goals. To work together coordination is required, and for that purpose a coordinator is also required to keep the ship on the course agreed upon. A coordinator by virtue of his position would be better informed and for that reason would be looked upon for guidance and instructions. Soon enough he would be in a position to issue directions without discussing his reasons with those who are to follow the directions and these people would carry out the directions without even thinking of objecting because better knowledge and better understanding of the situation are pre-supposed. Now, as and when this coordinator leaves his position and someone else steps in, he would also be obeyed the same way because, again, a better understanding is presumed. The hierarchy, thus, returns and so does authority. Those who question orders would be considered to be working against the interest of the common endeavour and would, thus, be excluded, which is a form of punishment. Therefore, legitimate coercion makes a natural come back.

Therefore, both Marxists and Anarchists seek to do away with coercive measures and class domination, and for that they suggest their own ways, which involve the disappearance of State. However, it is clear from the above discussion that both Marxists and Anarchists fail to supply a viable alternative to the State that is significantly different from the State they seek to dissolve. The solutions they offer seem to carry the seeds of the problem they seek to remedy. They wish to fight for the dominated but it turns out that the domination works through the free consent of the dominated. And this is primarily because the dominated either dominates someone else or hopes to be a dominator one day and is, therefore, not interested in the abandoning of the system but is making it work to his advantage.

Abolishing hierarchy is abolishing hope, and hope is the very engine of dreams fuelledby possibility and opportunity. And no revolution is possible until hope sinks.

THE FUNDAMENTALS OF ANARCHISM