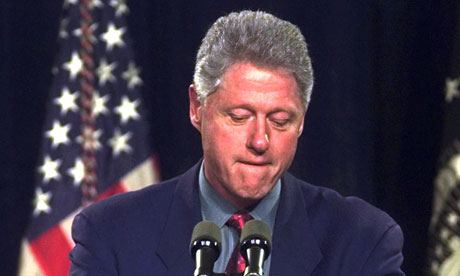 It is in the very nature of power to be intoxicating, which is why it tends to make inroads into the psyche of the powerful and makes them act irresponsible. Bill Clinton was just one of them who thought he could get away with. And, interestingly, he pretty much did. Of course, he had to carry the blemish, but his presidency sailed through the impeachment attempt.

For the unlikely uninitiated, we are talking about Bill, Monica and what happened between the two in the White House, where Monica interned and shot to infamy after her ‘entertaining’ the then President came to light. She did treasure her liaison with President Clinton, which made her keep the clothes she wore during the ‘act’. It was the stains on this dress that conclusively pointed an incriminating finger at Clinton when they were subjected to DNA analysis.

The little ‘fun’ that the President slyly attempted on the side came back to hit his presidency hard and remains there as proof of the vulnerability of men in power to feminine charm. Clinton is not the only example of influential men taking advantage of their position to seduce or force.

The little Presidential ‘fun’ could have remained a secret forever, had the urge to share her experience with arguably the then most powerful man in the world had not taken over Monica Lewinsky. So, it was when she confided in Linda Tripp, her friend and Defense department co-worker, that things began to take an ugly turn, for Tripp taped her conversations with Lewinsky to take advantage later. When, in January 1998, Lewinsky swore on affidavit in Paula Jones case that she had not had any sexual relationship with President Clinton, Tripp handed over the tapes of her recorded conversation with Lewinsky to Kenneth Starr, the Independent Counsel investigating Clinton .

It was Paula Jones who brought President Clinton’s philandering ways under public glare by filing a sexual harassment lawsuit against the President for taking sexual liberties with her when he was the Governor of the State of Arkansas while she was an employee of the State administration.

Jones claimed that she was taken to Governor Clinton’s room on May 8, 1991 after Arkansas State Police Trooper Danny Ferguson told her that the Governor wanted to meet her in his room and escorted her to Clinton ‘s room. Ferguson stood outside the door and according to him when Jones stepped out she said that she wouldn’t mind being Clinton ‘s girlfriend. Jones, of course, denied having said any such thing and included Ferguson as a Defendant with Clinton in her lawsuit against the President.

However, Jones chose to stay quiet for nearly four years and just two days before the completion of three years, after which the statute of limitations would have barred her from filing a lawsuit, she filed against Clinton on May 6, 1994.

However, the motion by President Clinton for a summary judgment was granted before the case reached trial and the judge held that Jones failed to prove that she suffered any damage at all. The dismissal was challenged by Jones before United States Court of Appeals for the Eighth Circuit, but on November 13, 1998 a settlement was reached between Clinton and Jones for a sum of $850,000, the amount that Jones had asked for in damages, in exchange for her agreement to drop appeal. However, there was no apology from Clinton ‘s side, and the President maintained that he was innocent and paid up only to go ahead with his life.

But the agreement did not stop the court and Judge Wright to hold President Clinton in civil contempt of court in April 1999 for having falsely testified in relation to his affair with Monica Lewinsky. Clinton was ordered to cough up $1,202 for the court and an additional sum of $90,000 was also to be paid to Jones’ lawyers to compensate for the expenses that they incurred on account of Clinton ‘s misleading answers.

The judge did not stop at that and also referred Clinton ‘s conduct to the Arkansas Bar for disciplinary action. The action was taken and on January 19, 2001, Clinton ‘s license to practice law was suspended for five years and he was also fined $25,000. Clinton also faced disbarment from the United States Supreme Court Bar, but before the disbarment could come, he resigned from the Supreme Court Bar in November 2001.

However, Monica Lewinsky scandal did further damage because while Jones accusations could be denied, Lewinsky’s story was undeniable because of the invulnerability of the evidence available. Furthermore, it did so much damage to Clinton ‘s presidency because the Lewinsky affair not only involved sexual demeanour, but also perjury.

According to Lewinsky, she had nine sexual encounters with President Clinton between November 15, 1995 and March 29, 1997. The March 1997 encounter was denied by Clinton .

Lewinsky was hired in 1995 to work as an intern at the White House, but was later relocated to the Pentagon in April 1996 because her superiors felt that she was around Clinton for longer than necessary. When Lewinsky confided in Linda, the latter asked her to save Clinton ‘s gifts and to not have the now infamous blue dress dry cleaned because the dress had Clinton ‘s sperm stains created during their sexual encounter on February 28, 1997 near the Oval Office.

When Clinton denied having sexual relations with Lewinsky during the Jones proceedings, he was denying having ever come in physical contact with Lewinsky’s “genitalia, anus, groin, breast, inner thigh, or buttocks”. He claimed that the definition of “sexual relations” as agreed upon included ‘giving’ but not ‘receiving’ oral sex.

Originally written for and published in LAWYERS UPDATE  as a part of ‘THE LAW AND THE CELEBRITIES‘ series in November 2011.