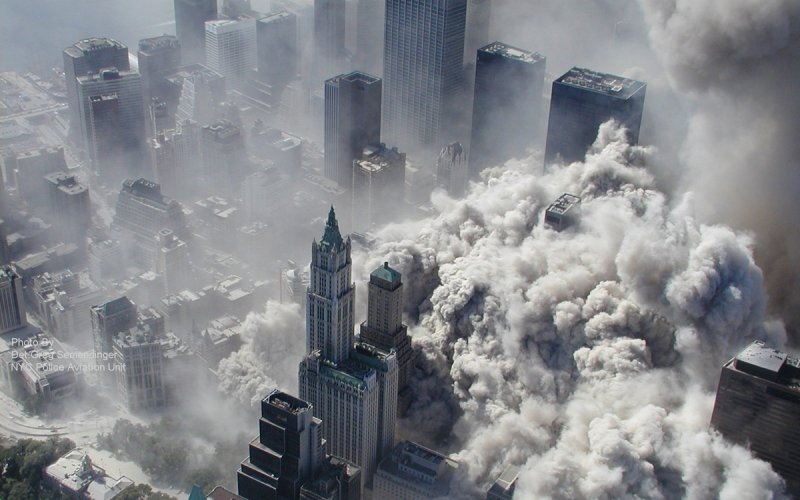 Immediately after 9/11 President George Bush declared that “this crusade, this war on terrorism is going to take a while”. The use of the word ‘crusade’ was later regretted on account of its religious undertones, which made President Bush’s statement offensive to the Muslims. President Bush and other US officials insisted that any State that harboured terrorists would face what Vice-President Dick Cheney called the “full wrath” of American military might. 1

Having ascertained the responsibility for 9/11, on September 20, 2001, the U.S. stated that Osama Bin Laden was the principal architect of the WTC Attack, and issued a five-point demand-cum-ultimatum to the Taliban regime of Afghanistan. The US demanded:

1. That all leaders of al-Qaeda be handed over to the US.

2. All forgein nationals imprisoned in Afghanistan be released forthwith.

3. All terrorist training camps be shut down immediately.

4. All terrorists along with their supporters be given over to the appropriate authorities.

5. The US be given complete access to the terrorist training camps for the purpose of inspection.

The very next day, on September 21, 2001, the Taliban rejected the US demands stating that they had no evidence linking Laden to the WTC Attack. On September 22, 2001, the Taliban regime was derecognized by the United Arab Emirates, and later Saudi Arabia, which left Pakistan as the only country to have not severed its diplomatic ties with the Taliban. The Taliban were being progressively isolated and the heat against it was rising exponentially.

On October 7, 2001, the Taliban expressed their willingness to try Laden in an Islamic court in Afghanistan in accordance with Islamic laws. The proposal was promptly rejected by the US, and the combined US-British forces launched military campaign against the Taliban the same day beginning with bombing the Taliban centers and al-Qaeda training camps.

A week later, on October 14, 2001, the Taliban proposed to have Laden tried in a third country provided the evidence of Laden’s involvement in the WTC Attack was presented to them. The US rejected the proposal right away and continued its military operations.

The NATO council had already declared that the WTC Attack, which was an attack on the US, was an attack against all NATO nations. The declaration satisfied Article 5 of the NATO charter, and it was the first time that the provision formulated during the Cold War with a military strike by the Soviet Union in mind, was invoked. Article 5 authorizes NATO nations to “assist the Party or Parties so attacked by taking forthwith, individually and in concert with the other Parties, such action as it deems necessary, including the use of armed force, to restore and maintain the security of the North Atlantic area.”

It did not take long for the US to dislodge the Taliban from the center of political power, and on November 13, 2001, the Taliban were forced to flee Kabul leaving the capital city under the control of the US forces. Before that, Mazar-e-Sharif, the fourth largest city of Afghanistan and the capital of Balkh province, had already been taken over by the US forces on November 9, 2001. Taliban controlled regions continued shrinking as the armed forces advanced, and finally Kunduz, the last Taliban-controlled city in the north, fell under the US control on November 26, 2001. Most of the Taliban in the north had fled to Pakistan, but the battle was not over in the south.

However, even in the south the Taliban had retreated to Kandhar, and the US-led forces were advancing rapidly. In November 2001, the US established Forward Operating Base (FOB) Rhino, the first US land base established in Afghanistan in the Registan Desert, 100 nautical miles (190 km) south-west of Kandhar. And in December 2001, Kandhar came under the US control. Although Taliban had been dislodged and were weakened to a great extent, the remnants of al-Qaeda and the Taliban continued mounting resistance against the US-led forces and the US presence in Afghanistan.

However, despite having pushed the Taliban to the margins, the US had not yet succeeded in hitting their primary target – Osama Bin Laden. Laden was believed to be hiding in the mountains of Tora Bora (Pashto for ‘Black Cave’). Therefore, the US-led armed forces launched a military campaign to find Laden, and the Battle of Tora Bora was fought from December 12, 2001 to December 17, 2001. The US military might prevailed and the US-led forces took control of Tora Bora destroying the Taliban and al-Qaeda bases in the region, but Laden managed to get away. He was believed to have fled to Pakistan.

The number of fighters in the valley was initially estimated at 150 to 200, but later the number was found to be in the range of 500 to 1000. US forces believed that they had killed some 1000 fighters during the operation, but the figure is in dispute with other sources, including the Afghan commanders, reporting the number to be somewhere between 100 and 200.

Again, despite the success of ‘Operation Anaconda’, the Taliban and al-Qaeda resistance had not been fully eliminated. The Taliban insurgency gradually resurfaced, to counter which the ‘Operation Mountain Thrust’ was launched by the US and allied forces in 2006. It was a joint operation by NATO and Afghan forces and involved over 2,300 U.S. and 3,300 British troops together with 2,200 Canadian troops and around 3,500 Afghan soldiers with large air support, and resulted in the death of over 1,100 insurgents with over 387 of them captured. On the other side, coalition forces lost 150 soldiers. However, the operation could not really stamp out the insurgency, and thus failed to accomplish the primary objective despite having eliminated a considerable number of insurgents.

Under the command of NATO, the Canadian forces carried out ‘Operation Medusa’ in July 2006 to clean the region of the Taliban. The Taliban offered stiff resistance, but, supported by the US, British, Dutch and Danish forces, the Canadian forces managed to take control of the Panjwaii area. NATO launched ‘Operation Mountain Fury’ in September 2006 to clear the Taliban from the eastern provinces of Afghanistan. Several other military campaigns such as ‘Operation Veritas’, ‘Operation Herrick’, ‘Operation Mountain Fury’ and ‘Operation Falcon Summit’ were carried out by the allied forces in different parts of Afghanistan at different points of time in order to eliminate the Taliban and free the nation of Taliban control, influence and threat. However, despite the use of massive force, the Taliban and al-Qaeda could not be completely eliminated.

However, the leader of al-Qaeda and the principal perpetrator of the WTC Attack, Osama Bin Laden, was still at large. In 2006, the US chose to shut down the special CIA unit called ‘Alec Station’ dedicated to pursuing Laden, and the CIA spokesperson, Jennifer Millerwise Dyck, defended the decision saying, “The efforts to find Osama Bin Laden are as strong as ever…

However, Laden – a terrorist – could not be allowed to get away with attacking the world’s most powerful nation. And President Obama realized it soon enough. “We will kill Bin Laden. We will crush al-Qaeda. That has to be our biggest national security priority,” Obama asserted on October 7, 2008. 2

The pursuit for Laden was renewed, and by April 2011 several intelligence inputs indicated that Laden was located somewhere around Abbottabad in Pakistan. Finally, the operation code-named ‘Operation Neptune Spear’, authorized by President Obama and carried out as a CIA operation by a team of United States Navy SEALs with ground support from CIA operatives, managed to get to Laden on May 2, 2011 at around 1:00 a.m. (local time). The swift raid on Laden’s compound at Abbottabad, Pakistan, was launched from Afghanistan. The Seals found Laden on the second floor in his bedroom with two women, who tried to protect him by stepping in front of him. One of the soldiers stepped forward and pushed the women out of the way. The Seal behind him shot him in the head and chest killing him immediately. He was unarmed. “Geronimo EKIA,” radioed a soldier. ‘EKIA’ is acronym for ‘Enemy Killed In Action’. ‘Geronimo’ was the code-name for the stage when Laden was either captured or killed. 3

Laden’s body was then flown to the USS Carl Vinson, a US aircraft carrier in the north Arabian sea, and was given a burial at sea reportedly “in conformance with Islamic precepts and practice”.

Originally written for and published in LAWYERS UPDATE  as a four-part ‘Crime File’ in October 2012.

Anarchist Conception of Hierarchy and Authority

Anarchist Conception of Hierarchy and Authority