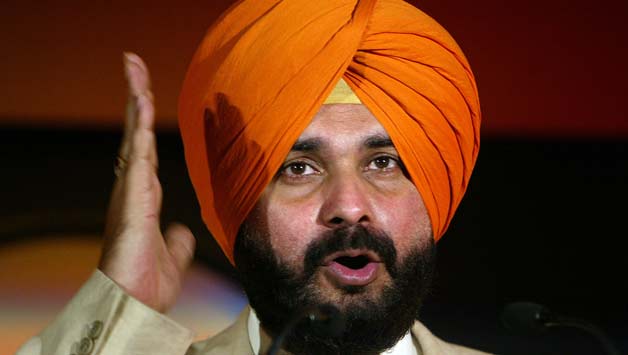 Navjot Singh Sidhu’s is among the most easily reconizable faces on Indian television, and almost everybody who has spent any amount of time watching television in India is familiar with his catchy oneliners that are now fondly referred to as ‘Siddhuisms’. But it is not the small screen that made him famous. It was his explosive performance as a cricketer playing for the Indian team at the international level. However, he did not begin ‘explosive’; he started off more like a damp squib and scored a measely 19 runs in his international test debut against the West Indies at Ahmedabad in 1983 following it up with another dismal performance in the same series. He was another lost hope. Years slipped past rather quickly, and soon enough it was time for the 1987 Cricket World Cup, and Sidhu was brought into the Indian side. And this time the batsman who was once called a “Strokeless Wonder” and who would be later called “Sixer Sidhu” did not disappoint posting four half centuries in his five World Cup 1987 innings.

Sidhu scored his first century in 1989 against Pakistan in Sharjah, and a few years later his highest score of 134 came up against England at Gwalior in 1993. Sidhu amassed over 500 Test runs in a year thrice over in 1993, 1994 and 1997, and made his only Test double century against the West Indies in 1996-97 when he scored 201 persisting at the crease for 11 hours. Sidhu was also the first batsman to score over 5 centuries in One Day Internationals. He retired from all forms of cricket in December 1999.

Sidhu landed on the wrong side of the law on December 27, 1988 in Patiala, when following a scuffle ensuing from a roadrage altercation Sidhu allegedly dragged out one Gurnam Singh from his vehicle and punched him repeatedly. Gurnam Singh collapsed on the spot and when he was taken to the hospital, the doctors declared him dead. There were two more people with the deceased – Jaswinder Singh and Avtar Singh – and there was another person with Sidhu – Ravinder Singh Sandhu. Sandhu was made a co-accused with Sidhu. The incident occurred at around 12:30 p.m., and the FIR of the incident was promptly registered at 1.30-1.45 p.m. by the police.

At the end of the investigation, the police submitted a chargesheet naming Ravinder Singh Sandhu as the sole accused. Navjot Singh Sidhu was not named as an accused. However, after the Additional Sessions Judge (ASJ) had framed charges against Sandhu under section 304 Part I IPC and had looked into some of the evidence available, he found it fit to pass an order under section 319 of the Cr.P.C. summoning Sidhu to stand trial. So, although the police had exonerated Sidhu, the ASJ found sufficient evidence to proceed against Sidhu. However, as the trial proceeded and further evidence was produced, the ASJ did not find the evidence on record sufficient to prove Sidhu’s guilt beyond reasonable doubt. What turned the case over was the medical report, which stated that the death was caused on account of the injury to head and the weak heart of the deceased, and the injuries caused by the alleged punches dealt by the accused were not capable of causing death. Dr. Krishan Vij, Professor and Head of the Department of Forensic Medicines, Government Medical College, Chandigarh, who was member of the Board constituted to look into the cause of death of the deceased said in his opinion: “Death in this case is attributed to the effects of head injury and cardiac condition. However, the head injury itself could be sufficient to cause death in the ordinary course of nature.” Further, during his cross-examination also he clearly stated, “It is correct that an abrasion is hardly of any significance from the point of view of loss of life. Injury No.1 was an abrasion only.”

Sidhu was acquitted by the Sessions Judge, Patiala, by the judgment and order dated 22-9-1999, but the High Court, in appeal, reversed the judgment, convicted both the accused – Navjot Singh Sidhu and Rupinder Singh Sandhu – under section 304 Part II IPC and sentenced each one of them to 3 years Rigorous Imprisonment and a fine of rupees one lakh. Sandhu was convicted under section 304 Part II read with section 34 IPC. He was also convicted under section 323 of the IPC and a 3-month term of Rigorous Imprisonment was awarded.

Right after the conviction by the High Court, Sidhu chose to resign from the membership of the Lok Sabha although he could have continued without much difficultly by filing an appeal against the judgment of the High Court, for section 8(4) of the Representation of the Peoples Act, 1951, provides: “Notwithstanding anything in sub-section (1), sub-section (2) and sub-section (3) a disqualification under either sub-section shall not, in the case of a person who on the date of the conviction is a Member of Parliament or the Legislature of a State, take effect until three months have elapsed from that date or, if within that period an appeal or application for revision is brought in respect of the conviction or the sentence, until that appeal or application is disposed of by the court.” However, Sidhu chose to resign for “maintaining probity and moral values in public life”.

Sidhu wanted to contest Lok Sabha elections and seek a fresh mandate. However, his conviction stood in the way. He moved the Supreme Court of India pleading for a suspension of conviction so as to allow him to contest elections. The Apex Court touched upon the merits of the case briefly and pointed out that certain facts and circumstances that weighed with the Sessions Judge in acquitting Sidhu were not adequately considered by the High Court in appeal. The Supreme Court observed that certain features “of the case which touch upon the culpability of the appellant, prima facie appear to be in his favour. Another feature which has a bearing is that the findings on factual aspects of the case recorded in favour of the appellant by the learned Sessions Judge resulting in acquittal have been reversed in appeal by the High Court.” The Apex Court also considered the fact that Sidhu, instead of continuing as a Member of Parliament, which he could have easily done, chose to resign and seek a fresh mandate. And in the view of the facts and circumstances of the case suspended Sidhu’s conviction by an order delivered on January 23, 2007 [Appeal (Crl.) 59 of 2007] so as to allow him to contest Lok Sabha elections.

Originally written for and published in LAWYERS UPDATE  as a part of ‘THE LAW AND THE CELEBRITIES‘ series in June 2013.