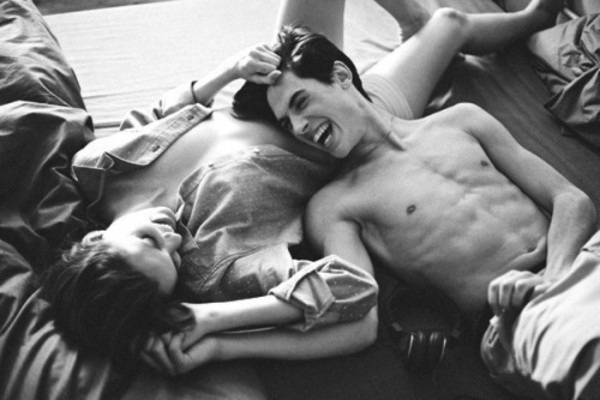 Pairs are made and marriages arranged in heaven; only weddings are organized down here. This divinity-laced understanding of the very social institution of marriage must have suffered massive setback at the hands of the divorce courts. The heaven-made bond could be so easily undone by things as ephemeral as ink and paper. It was bound to raise a few very relevant questions and a far greater number of eyebrows.

Marriages may be divine and the man-woman bond sacred, but circumstantial pressures and temperamental incompatibilities can still dissolve the divine content in a marriage and introduce earthly brittleness into it making it prone to breakdown. But that is just the weakness of particular marriages and does not undermine the sanctity of marriage as an institution. So, even if marriages were not unbreakable, they were still sacred, for the pious can be defiled but that does not make it any less pious.

Then live-in relationships arrived. And the social status of marriages with all its divine trappings came under serious challenge. If a girl and a boy could live together without social approval accorded through marriage, it meant a clear and unmistakable threat to the very institution of marriage. While divorce only meant that the heavenly bond was breakable, live-ins meant there was no social sanction required. The requirement of the ‘license’ was thus rejected. Of course, the society could not have approved of live-ins because it meant undermining the institution of marriage, which also happens to be one of the means to maintain and perpetuate class distinctions. Therefore, societies that have rigid class distinctions of any kind would resist live-ins harder, and would frequently cite principles of morality against such arrangement. But there is little morality involved, which is why moral arguments against live-ins fail to make a dent in the sphere of individual rights.

From the perspective of rights, every individual has the right to decide for himself or herself as to how he or she would spend his or her life. The right to makes one’s own decisions, so long as those decisions do not affect the similar rights of others, is inviolable. Since the decision to cohabit without marriage does not directly affect the rights of others adversely, there is no reason why such right should be restricted or curtailed or subjected to any rules except those that apply to any and every couple.

But then, the force of law that social norms, customs and conventions carry cannot be overlooked either because they not only operate as laws without being enacted but are also a recognized source of law. Therefore, if a law happens to come in headlong conflict with highly regarded set of social norms, it is likely to lose legitimacy in the eyes of the people, who might even start questioning the authority of their representatives to enact the laws that they do not collectively approve of. Morality of the law is presupposed, for there cannot be any such thing as ‘immoral law,’ as in that case not only the moral right to protest against such law automatically accrues to the people, but to protest against such law might also be regarded as one’s moral duty. Of course, such a backlash can occur only and only when the law in question displays scant regard for the very moral foundation that a particular society stands upon and the principles it holds dear and religiously abides by. In the garb of progressive thinking societies would not generally change their outlook towards morality, for it is closely associated with their sense of good and bad, right and wrong. Therefore, the concepts of pre-marital sex and live-ins cannot be thrust down the throats of, say, an Islamic society because such concepts are in clear conflict with Islamic way of life. But the question is whether or not it holds equally true for a multi-cultural, multi-religious and highly progressive nation like India.

Pre-martial sex and live-ins are not illegal in India because no law proscribes them. Does it mean that they fall in the grey area between legal and illegal? In other words, is it so that the Indian society and its political alter ego – the Indian state – do not approve of pre-marital sex and live-ins but still tolerate their existence? This is not an easy question to answer because there is no way of gauging what Indian people collectively think about such concepts. However, it is still a good idea to refer to India’s cultural background and the enacted laws to find if Indians find live-ins and premarital sex repulsive and immoral.

Recently, the Supreme Court of India reiterated that neither live-ins, nor premarital sex was illegal. The Bench comprising Chief Justice K.G. Balakrishnan, Justice Deepak Varma and Justice B.S. Chauhan reportedly remarked, “When two adult people want to live together what is the offence? Does it amount to an offence? Living together is not an offence. It cannot be an offence. There is no law which prohibits live-in relationship or premarital sex.”

Not only did the Supreme Court refuse to term live-ins illegal, but also clearly and unambiguously endorsed living together as part of ‘right to life’. The Bench said, “What is the offence and under which section? Living together is a right to life.”

The Bench also sought to draw a mythological parallel by saying, “Even Lord Krishna and Radha lived together according to mythology.” Now, this is not very convincing because Lord Krishna, as per mythological texts, bid adieu to Radha when he left for Mathura to slay Kansa and did not meet her in person ever again. At the time of leaving for Mathura Lord Krishna was around 14 years old and lived with his foster parents, Yashoda and Nanda, whereas Radha lived in a separate village called ‘Barsana’. Therefore, there is no question of their living together. Wherever the mention of their togetherness occurs, it is largely in the spiritual sense and alludes to their mutual love, but does not imply physical cohabitation. In this regard, apart from ancient mythological texts, K.M. Munshi’s authoritative and highly regarded work Krishnavtaar may also be referred to. It is pertinent to add here that K.M. Munshi was not only a distinguished writer well-known for his contribution to literature, but was also a noted legal expert and a member of the Constituent Assembly that drafter the Constitution of India.

However, it might be a matter of debate whether Lord Krishna and Radha lived together or not, but live-in relationships find ample support in Hindu mythology. To mention one, Bhima lived-in with Hidimba and had a son with her by the name Ghatotkach, who later fought for the Pandavas and was always considered a legitimate son of Bhima.

Furthermore, there are eight kinds of weddings as per Manusmriti that give rise to a valid marriage. One of them is Gandharva Vivah (Wedding by rites of the Gandharva), which does not involve any ceremony other than voluntary physical union of the maiden with her lover arising from desire and culminating in sexual intercourse. The lovers so united can live together as man and wife without any further endorsement from man or God. The fact of marriage is presupposed in the act of physical union.

The Supreme Court talking of the similar kind of presumption of legitimacy when it ruled that in case of long span of cohabitation, marriage has to be presumed and the party challenging the marriage has to prove its case and not the other way round. So, if a couple has been living together for a sufficiently long period of time, those who wish to challenge the relationship on any ground – assuming that such a ground is available – would be required to prove that the marriage did not take place. The presumption of law would stand for the marriage and the couple would not be asked to prove the fact of marriage. Naturally, it is an arduous task to prove that marriage did not take place, and the presumption of law in favour of marriage is clearly to protect live-in relationships against needless moralistic assaults by busybodies.

The Indian legislature, too, has done its bit for live-in relationships. The Protection of Women from Domestic Violence Act, 2005, defines “aggrieved person” as “any woman who is, or has been, in a domestic relationship with the respondent and who alleges to have been subjected to any act of domestic violence by the respondent.”

The DV Act goes on to define “domestic relationship” as “a relationship between two persons who live or have, at any point of time, lived together in a shared household, when they are related by consanguinity, marriage, or through a relationship in the nature of marriage, adoption or are family members living together as a joint family.”

Although it cannot be said that the Act accords legal validity to live-in relationships, but it can still be conclusively inferred that the law does not see such relationships as illegal or immoral.

Thus, there is nothing in our enacted laws, or judicial approach, or cultural background that stands against live-in relationships. Much of the hue and cry against live-ins is the byproduct of a misplaced sense of culture and decency. After all, marriages are nothing but socially endorsed live-in arrangements.

Originally written for and published in LAWYERS UPDATE as Cover Story [May 2010 Issue; Vol. XVI, Part 5]