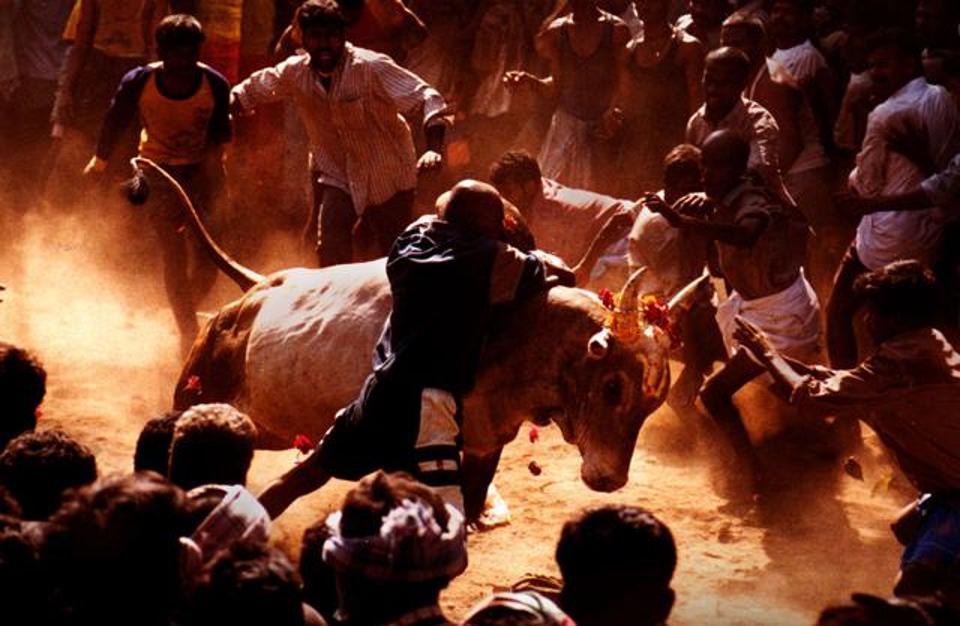 In India, our hearts never stop bleeding for the cows, but their husbands — the bulls — are an altogether different matter. Compared to their human counterparts, the bulls might not have quite as many husbandly complaints of spousal maltreatment, but in the times of Jallikattu they can almost definitely plead gender discrimination.

When the issue of animal abuse and needlessly endangering human life quickly metamorphosed into an issue of Tamil pride, people conveniently ignored the fact that a society that takes pride in torturing defenseless animals for entertainment must have shockingly little to be proud of for it to be forced to celebrate animal cruelty in the name of tradition. Isn’t compassion for all things living the bedrock of all civil societies and ethical systems, religious or otherwise? The praise for the ‘peacefulness’ of the Jallikattu protests is downright ridiculous, for it’s like praising a murderer for the humaneness of his method. What can possibly be good, honourable or civil about demanding the freedom to torture animals for fun?

In its detailed and very well reasoned 117-page judgment in Animal Welfare Board of India v. A. Nagaraja & Ors, delivered on May 7, 2014, the Supreme Court of India went to admirable lengths to point out very clearly as to why the practice of Jallikattu in Tamil Nadu and bullock-cart races in Maharashtra deserved to be banned for causing extreme suffering, both physical and mental, to the animals involved for no justifiable reason. For the purpose of factual accuracy, the Supreme Court had for reference a detailed first hand information report submitted by Dr. Manilal Vallyate and Mr. Abhishek Raje, the Observers of Animal Welfare Board of India (AWBI), regarding the Jallikattu events that took place at Avnlapuram on January 14, 2013, at Palamedu on January 15, 2013 and at Alanganallur on January 16, 2013. The facts pertaining to the kind and extent of cruelty that the Jallikattu bulls have to endure are not in dispute, for they are borne out by loads of unimpeachable video recordings freely available online apart from several official reports filed in this regard by multiple observers appointed for the purpose, including the one placed before the Supreme Court by the AWBI.

The report noted that the ears of over 80 per cent of the Jallikattu bulls are cut with three-fourths of the auricle shorn off, which is extremely painful, as the auricle is made of cartilage, is very vascular and has a high density of nerves. The bulls become wary of anybody touching their heads on account of the past trauma making them easier to provoke, which might be the reason for the mutilation in the first place, for angry bulls is what Jallikattu needs the most. The tail of the bull, which is an extension of the spinal cord and vertebral column with nearly 20 small bones, is pulled and twisted by the participants during the event causing dislocation and fracture of the tail vertebrae thereby inflicting intense pain and suffering on the animal.

The report submitted to the Supreme Court further noted that ninety-five per cent of the bulls were soiled with faeces from below the base of their tails and across much of their hindquarters, as the bulls were forced to stand in their accumulated waste for hours on end, and the report observed that frequent defecation and urination were indicators of fear and pain in cattle. Bulls are prodded with knives and sticks during the event to provoke them and make them turn violent as the instinctive fight-or-flight response kicks in. The report also mentions the practice of forcing alcohol down the throats of the Jallikattu bulls through plastic bottles prior to the event to get them agitated and violent. The report also mentions, among other such incidents, an incident in Palamedu in which a terrified bull sustained a crippling leg injury after he jumped more than 10 feet off a narrow road to escape a mob carrying sticks. In another such incident in Alanganallur, two bulls, who were terrified after being chased by the onlookers, ran amok and fell into open wells in an agriculture field.

To cut the long story short, the report by the AWBI details at length the extreme physical and psychological suffering the Jallikattu bulls are put through for the sole purpose of entertainment and leaves no room for doubt regarding the inherently cruel nature of the practice. The Supreme Court also noted that bulls and bullocks both are draught animals as a matter of fact and also as per the Prevention of Cruelty to Draught and Pack Animals Rules, 1965, which means they are used for the purpose of hauling heavy loads. The physical constitution of these animals with their rigid joints and heavyset bodies makes them fit for pulling heavy loads but also makes them unfit for running or even walking too fast. Furthermore, bulls, with two digits on each leg, are cloven feet animals, which makes it easy for them to bear and pull heavy weight but only at slow speed, for their cloven feet compromise their ability to walk fast. Horses, on the other hand, are solid hoofed, load-bearing animals that can run in addition to pulling weight. In short, bulls, unlike horses, and are not physically fit to run, which is why the Prevention of Cruelty to Animals (Transportation of Animals on Foot) Rules, 2001, particularly Rule 11, stipulate against the use of a whip or a stick to force the animal to walk or to hasten the pace of their walk. The legislation pertaining to animal cruelty, the government notifications excluding the bulls from the category of ‘performing animals’ and the Supreme Court judgment in the Animal Welfare Board of India v. A. Nagaraja (2014) are mindful of the fact that making bulls run and act violently is inherently cruel, it being inconsistent with the physical constitution and natural disposition of the animals, for these animals are neither hunters nor runners.

The 2014 judgment of the Supreme Court not only settles the position of law but also settles the fact that Jallikattu is cruel to the bulls, and while the legislature might be able to change the law, it can’t change the fact because, after all, making fishes fly and eagles swim can’t be kind no matter what the law says.

THE NATIONAL ANTHEM ORDER: Bad in Law, Bad in Fact

THE NATIONAL ANTHEM ORDER: Bad in Law, Bad in Fact