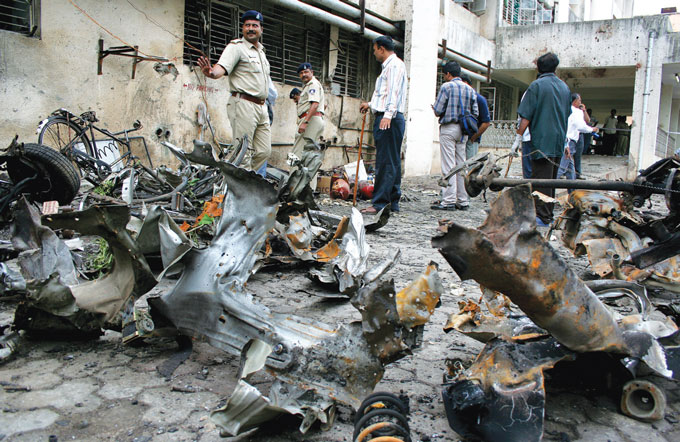 Gujarat was rattled with bomb blasts and the headlines cried murder. And then there were our very own netaswith their all too familiar rants about terrorists being a blot in the name of humanity and so on. Not to forget those sickening microphone-wielding TV journalists who walk around proclaiming in their almost-prophetic voices that no religion teaches hatred or endorses killing of the ‘innocents’.

Wake up. We have home-grown terrorism now, absolutely uninspired, un-orchestrated by any foreign agency. And it’s certainly not the same thing that we have been facing for decades now. There is nobody else to blame for it but ourselves. This is not an ideological statement or a political protest, but an act of sheer desperation. It’s heart-rending cry, a sharp shriek after the proverbial ‘clarion call’. It’s a scalding stamp of ‘failure’ slapped right across the face of ‘secular democracy’ that this nation pretends to practice. It’s a desperate backlash. It’s payback.

Let me give a quick recap. A train full of people was burnt in rage. A number of people died, most of them belonging to one community. Communal fires were stoked, and the innocent members of the minority community were massacred with barbarian abandon. And the monstrosity was overseen and assisted by the state government. It was quite clearly a state sponsored pogrom.

The State had chosen to make a distinction on the basis of religion for the most inhuman purposes – to maim, to rape and to kill. Secularism is part of the Basic Structure of the Constitution which even Parliament can’t touch, but a certain Chief Minister of a certain state took it for a gory ride with impunity.

Small children were shot through the heads, women brutally raped and hacked. So much so that one Babu Bajrangi was caught on camera bragging proudly about having cut open the womb of a pregnant woman. The state police not only refrained from containing violence, but also wholeheartedly helped the rioters, and in some cases went so far as to assist them by lending a generous helping hand. And this was done under the calculated superintendence of the state government. The policemen who disagreed and felt strongly about being true to their oath were either removed from ground zero or were simply stripped of powers while the highest elected official of the state betrayed the Constitution and also his oath to uphold it in letter and spirit at all times. The very Constitution from which this particular Chief Minister drew his power and legitimacy to slap orders around like a king was flagrantly violated.

The Constitution bestows power and authority on the elected representatives of the people with a specific condition that at no point shall the letter of the Constitutional be violated or its spirit ignored. And when an authority contravenes the letter or spirit of the Constitution, his claim to the office is automatically nullified. The hands of a swordsman cannot keep wielding the sword after having beheaded himself. So, technically, the moment the state government decided to let the blood flow, or even to refrain from doing enough to protect its people, it lost its legitimacy and from then on it was nothing but an unconstitutional government performing unauthorized functions. It was the duty of the electorate of Gujarat to arrange an ouster of such people from the positions of power.

But nothing happened. The people of Gujarat turned a blind eye to the bloodbath, conveniently condoned the pogrom and voted the violators of the Constitution back to power. And thus became accessories to crimes against humanity.

Secularism is an inalienable part of the Constitution’s Basic Structure. And the Constitution is the expression of the collective will of present and many past generations of Indians. The electorate of Gujarat could not go against the unimpeachable, standing mandate of the people of India. And when it did, its action of voting the violators back into power lost legitimacy automatically. But nothing could be done about it simply because we do not have any such Constitutional mechanism in place that could reverse such illegitimacy.

Besides, criminal law demands clear evidence connecting the victim and the tormentor, which, obviously, could not be provided because of the political nature of the crime. The injustice was, thus, perpetuated.

Naturally, the resentment rose and built day after day. The recent bomb blasts are the direct result of the failure of Gujarat’s electorate and the consequent resentment.

We don’t need stronger laws against terrorism, but a better legal mechanism to administer justice in cases where the highest state officials side with a section of people for purely political reasons jettisoning their constitutional obligations. We just can’t keep manufacturing terrorists and then punishing them. That’s no solution and will produce no results. All it can do is engender further resentment. Our terrorism today is a self-inflicted wound, and wounds can’t be knifed out.

First published on my WordPress Blog on August 21, 2008